The method that predicted the 2016 US Presidential Election is back for 2020.

In 2016, most polls missed President Donald Trump’s win but RIWI predicted a win for the President in the Electoral College, as well as highlighting that Secretary Hillary Clinton would win the popular vote by 2%.

With the 2020 Presidential Election a year away, we introduce our new election tracker. The tracker is different than traditional methods because it: (a) uses RIWI-powered technology that accurately predicted the 2016 Presidential Election; (b) it is continuous and in real-time; (c) it reflects both engaged and politically disengaged populations, in contrast to traditional polls which typically capture engaged, often paid, populations; and (d) it reflects views anonymously, reducing social desirability bias.

What makes these data different?

Unlike traditional polls which sample from a narrow, highly engaged group of (mostly paid) respondents, RIWI respondents come from a broad and truly random set of the population, and go far beyond those who typically answer surveys you see mentioned on TV or in the news. RIWI does not collect any personally identifiable data and respondents are not incentivized in any way (e.g. with money or rewards), allowing respondents to provide their views freely and securely, reducing social desirability bias. RIWI accurately predicted President Trump’s 2016 election win and many other recent elections and referenda. 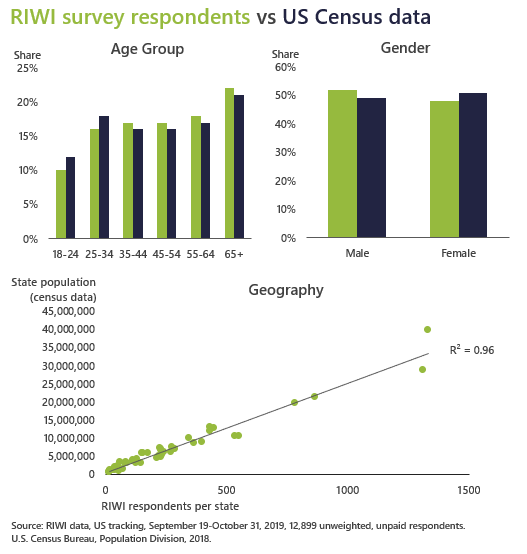 Which party will win in your state?

Respondents to the survey were randomly asked about their personal preference, with each third of the group being exposed to one of three possible head-to-head matchups between President Trump and one Democratic candidate (Former Vice President Joe Biden / Senator Elizabeth Warren / Senator Bernie Sanders).