Featured chart: Republicans pull ahead in the Midwest in October/November

Few traditional polls have been reporting on the Midwest, yet the Midwestern states are crucial to predicting the outcome of the upcoming election. In 2016, Iowa, Wisconsin, Michigan, and Ohio all flipped Republican, helping to secure a win for President Trump in the Electoral College. In the upcoming election all eyes will be on the Midwest. We have been tracking which party people think will win in their state across the Midwest since September 19 and the data show that in mid-October the Republicans overtook the Democrats. 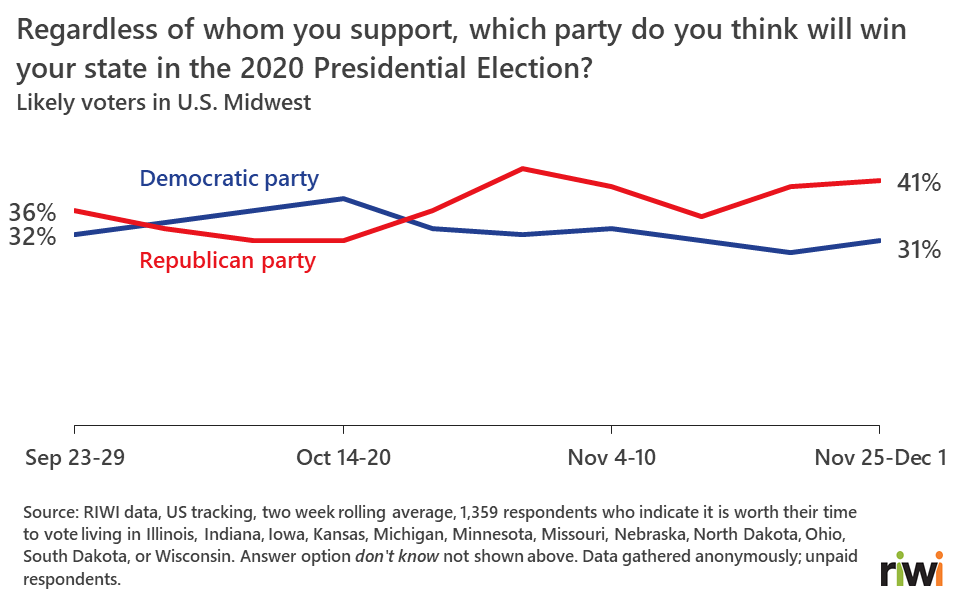 When we randomly expose three leading Democratic presidential candidates in head-to-head matchups against President Trump we continue to see a high share of don’t know responses, narrowing slightly over the past month in Senator Sanders’ and Senator Warren’s matchups. Senator Sanders has also pulled ahead of Senator Warren, however he now loses when facing off with President Trump.

RIWI’s election tracker is different than traditional methods because it:

Two of the “X-factors” that caused conventional polls to miss the 2016 election and that could manifest again in 2020 were 1) the underreflection of typically disengaged populations including those in the Midwest and 2) the “shy Trump voter” effect1. The RIWI patented methodology and technology platform addresses both X-factors.