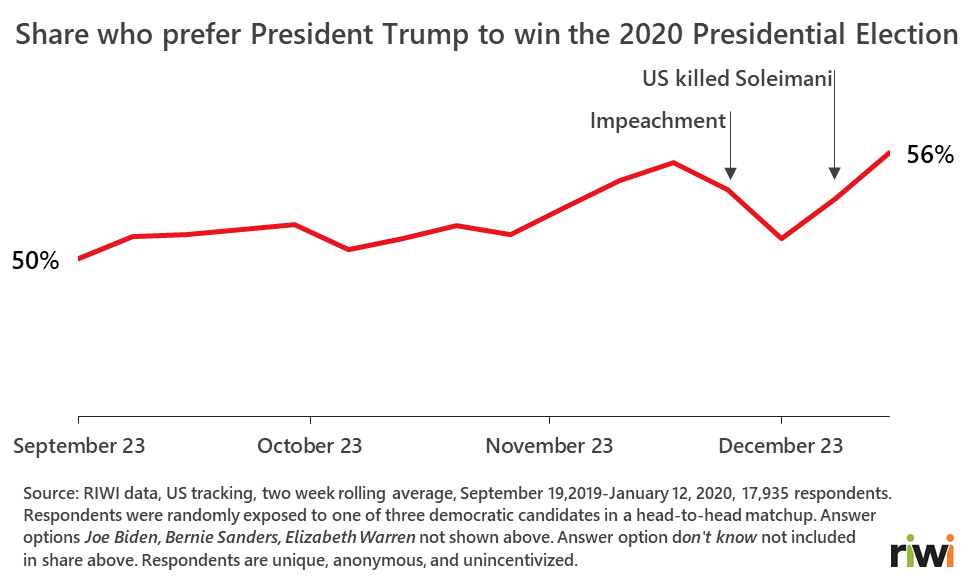 The past month has been eventful for President Trump; on December 18th, the House of Representatives voted along party lines to impeach him, followed two weeks later by backlash after killing Iran’s ‘Number Two’, General Qasem Soleimani, in a drone strike without Congressional approval. Have these significant events impacted Americans’ support for President Trump?

We randomly exposed respondents to three head-to-head matchups (against Former Vice President Biden, Senator Sanders, and Senator Warren), consolidated the results and excluded don’t know responses to find what share of respondents would prefer President Trump to win re-election in 2020. In the lead up to President Trump’s impeachment, support for him grew. While this support dropped sharply after his impeachment, it quickly began to rally the following week.

President Trump’s election in 2016 hinged on him winning several key swing states. Again, this election will likely be decided by the outcomes of these battleground states. While the above chart shows that Trump’s support is gaining nationally, in the future we will look to specific regional and state-level results to better predict the outcome of the upcoming election. In this study, RIWI’s unweighted survey data nearly match U.S. census data when comparing age, gender, and geographic distribution (as highlighted in our first monthly update). 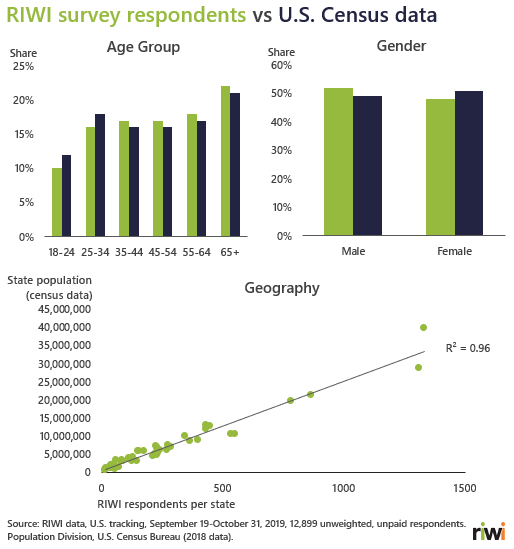 This month in our head-to-head matchups we continue to see a high share of don’t know responses, narrowing slightly again in Senator Warren’s case. With support for Former Vice President Biden falling this month, no Democratic candidate wins when facing off with President Trump.

RIWI’s election tracker is different than traditional methods because it:

Two of the “X-factors” that caused conventional polls to miss the 2016 election and that could manifest again in 2020 were 1) the underreflection of typically disengaged populations including those in the Midwest and 2) the “shy Trump voter” effect1. The RIWI patented methodology and technology platform addresses both X-factors.