Toronto, ON – April 21, 2022 – A new Compass Cold War II (CW2) Index launched by data firm RIWI (Real-Time Interactive Worldwide Intelligence) and macro strategist and Unbound founder, David Woo, shows that, as of April 18, 2022, half of Russians remain uncritically loyal to their country. Forty-eight percent of Russians agree that “people should support their country even if their country’s actions and policies are in the wrong.” This compares with 35 percent of Chinese and 32 percent of Americans who are uncritically loyal to their countries. To learn more about the study visit: https://riwi.com/research/how-do-russians-americans-and-chinese-perceive-the-new-cold-war/ 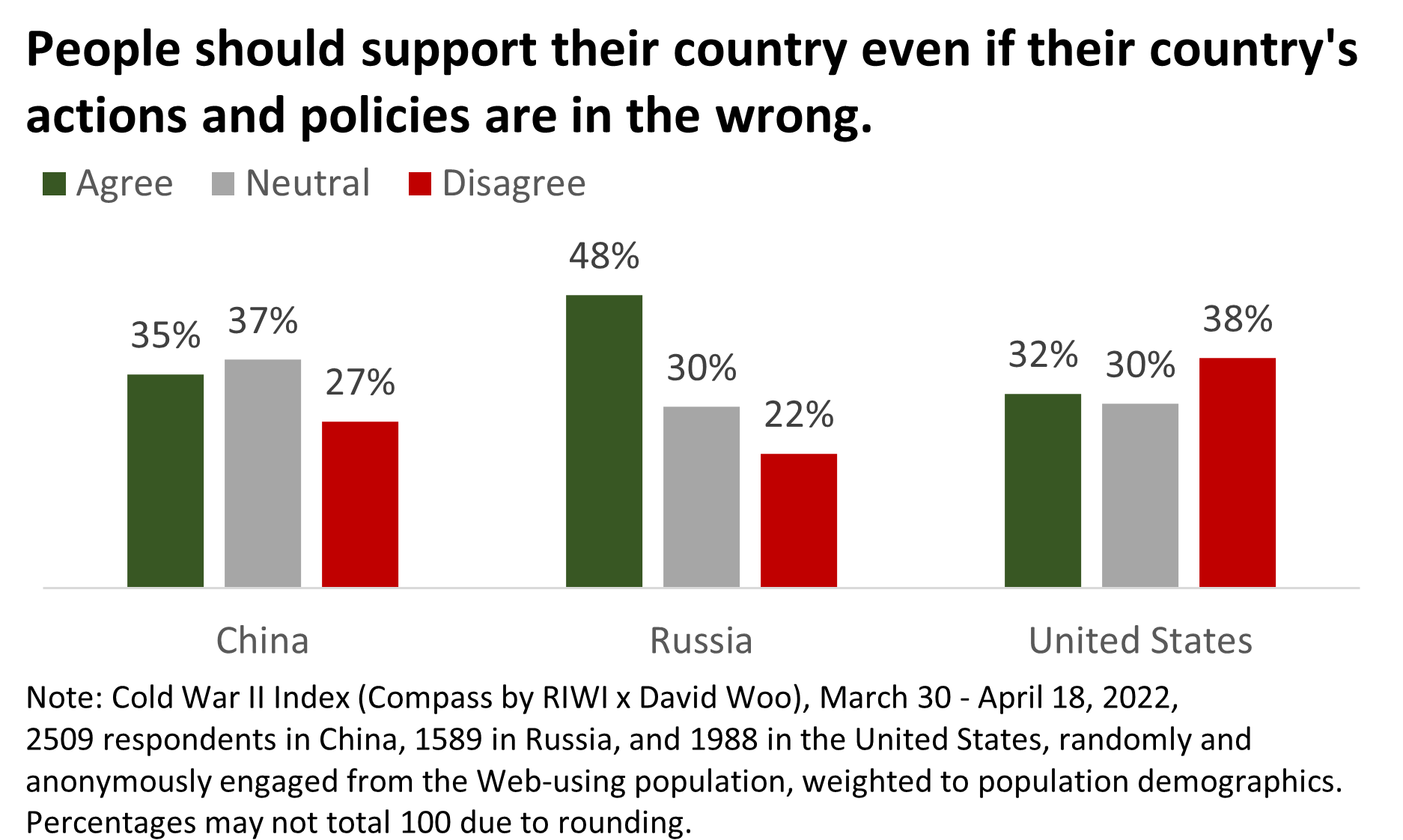 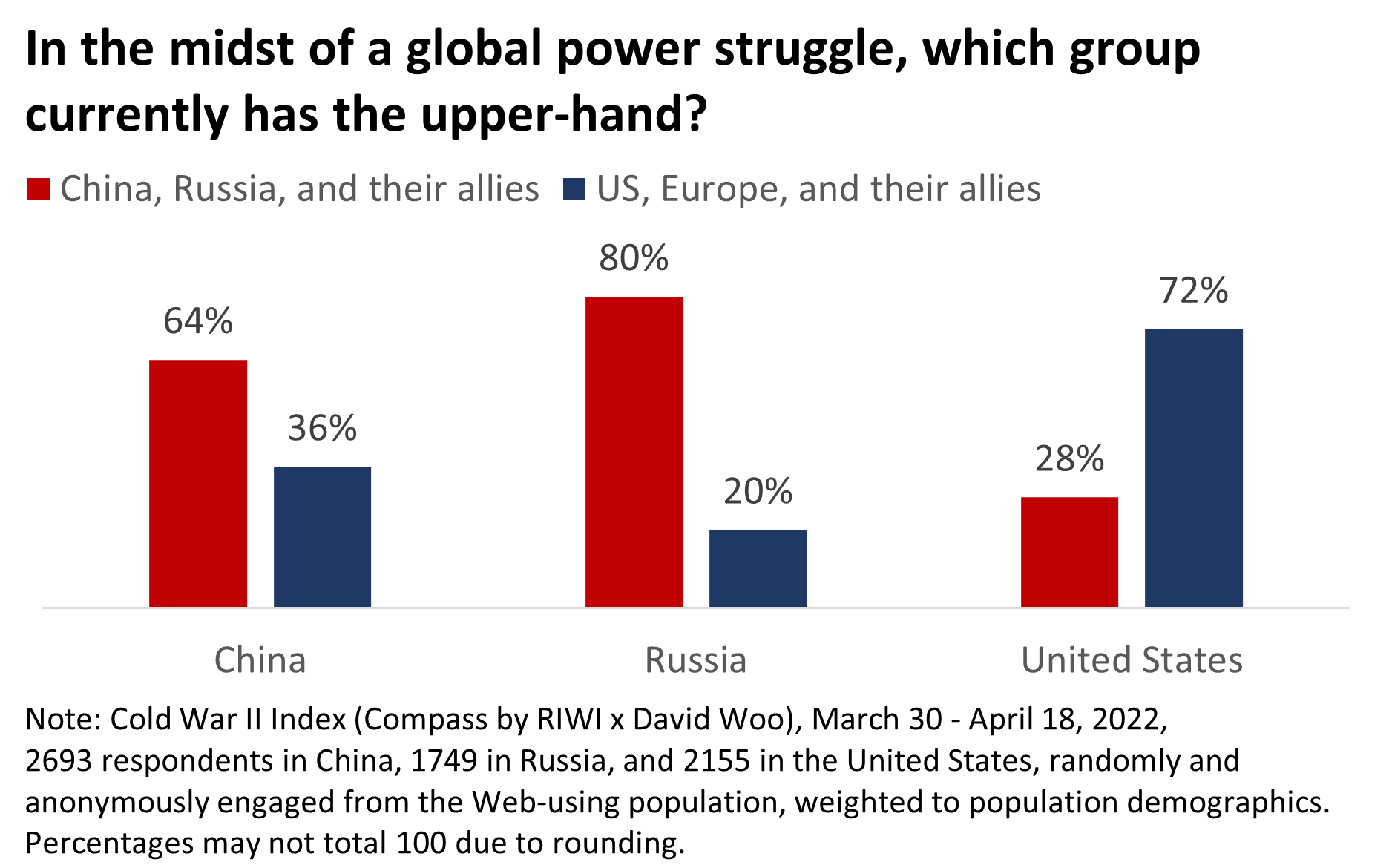 “Both sides believe they hold the superior position, which doesn’t bode well for a quick resolution,” said David Woo, founder of Unbound and former Head of Global Interest Rates, Foreign Exchange, Emerging Markets Fixed Income Strategy & Economics Research, Bank of America and former Head of Global Foreign Exchange Strategy, Barclays Capital, London. “Moreover, the conflict between Russia and its allies and the US and its allies is, at its core, not about political systems but about economic outcomes which is really what’s at stake here.”

Leveraging RIWI’s “Random Domain Intercept” Technology that minimizes bias and provides more reliable signals, the data in this study were collected anonymously and on a 24/7 basis from more than 1300 Russians, more than 1600 Americans, and over 2200 Chinese between March 30 to April 18. This is the first study of its kind to collect real-time data from Russian, American, and Chinese citizens about the global geopolitical realignment.

“Typical survey data from China and Russia are widely viewed as unreliable,” said Greg Wong, CEO of RIWI, “The information war being waged alongside the military one is making it even more difficult for analysts and decision-makers to reliably gauge current, let alone future, economic and political conditions. This ongoing study aims to fill part of this information gap by providing, to our knowledge, the only independent, broad-based, anonymous, real-time data on the realignment underway.”

The Compass Series of Indexes are fashioned to help financial institutions, multinational corporations, international organizations, government agencies, universities, think tanks, and individual retail investors to have their fingers on the pulse on the political-economic mega trends occurring in the world today. For more information on The Compass Series, visit https://riwi.com/compass-series/. Data collection continues on an ongoing basis and Index data subscriptions are available here: https://riwi.com/compass-series/compass-series-data-subscriptions/

Unlike typical sentiment and behavior data in these countries, the data in the Cold War II Index draws on a unique technology which minimizes biases associated with typical survey methods. The core concept behind the technology’s algorithms is that anyone surfing the Web has a random chance of exposure to the questions, which results in the inclusion of those who are not typically included in opinion polls.

No identifiable information is collected (e.g., names, email), no incentives for participation are provided, and respondents may end their participation at any time. These security measures/methodological characteristics encourage individuals to respond honestly (avoiding social desirability bias and incentive bias).

About Unbound:
Unbound is a global forum devoted to the promotion of fact-based debates about markets, politics, and economics. Created by renowned macroeconomist and former Wall Street strategist David Woo, Unbound takes on groupthink, propaganda and conspiracy theories through a critical analysis of markets, economics, and politics. Known for his contrarian calls on pivotal global events, Woo recently served as Head of Global Rates, Foreign Exchange, Emerging Market Fixed Income & Economics Research at Bank of America, where he managed the top ranked global macro strategy team on Wall Street. He was previously the head of Global Foreign Exchange Strategy at Barclays Capital and the Head of Local Markets Strategy for Central and Eastern Europe, Middle East and Africa at Citigroup. Woo started his career as an Economist at the International Monetary Fund and completed his Ph.D in Economics from Columbia University. Woo was voted one of the twelve smartest people on Wall Street in 2013 by Business Insider. To learn more visit https://www.davidwoounbound.com or follow him on LinkedIn or Twitter @Davidwoounbound

Founded in 2009, RIWI Corp. (TSXV: RIWI) (OTC: RWCRF) is a leading provider of accurate and real-time global consumer and citizen sentiment data, which reaches more countries and markets than any other firm. In order to improve global prosperity and equity, RIWI’s global machine-learning Web architecture conducts continuous, privacy-compliant surveys and ad tests that help organizations and government agencies break through the noise to find the truth about what people really think, want for themselves, and observe in the world around them. To learn more visit www.riwi.com or follow them on LinkedIn or Twitter @RIWIdata.