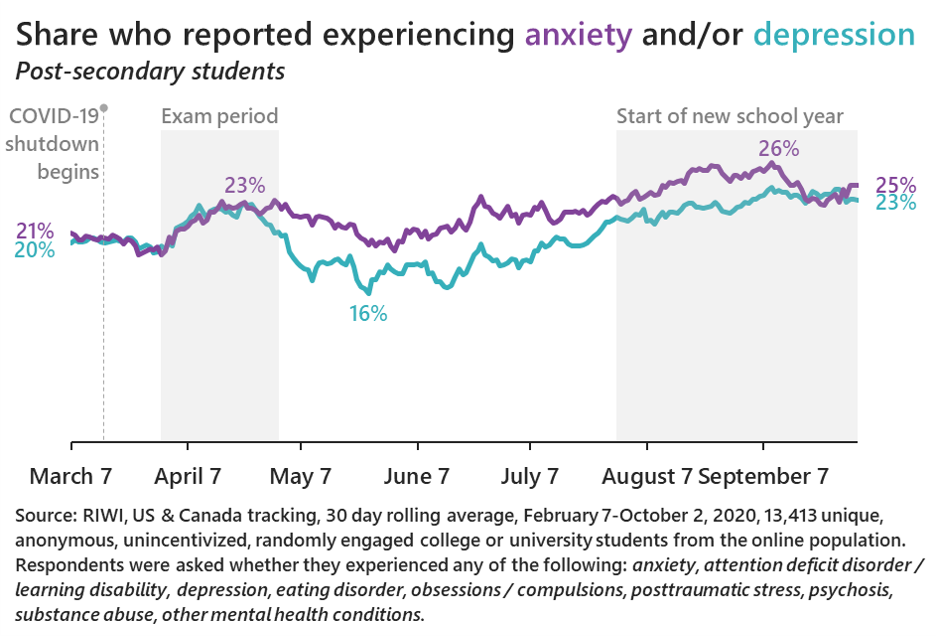 The goal: Accurate data on mental health conditions / access to care among college and university students in the United States and Canada

For this study, the RIWI team partnered with the Investigative Journalism Bureau at the Dalla Lana School of Public Health at the University of Toronto, and nine other post-secondary institutions across the US and Canada. RIWI’s role was to collect benchmark data on the prevalence, over time, of mental health conditions amongst university and college students in Canada and the US, and their self-reported access to mental health services in 2020.

To our knowledge there are no other robust, reliable continuous data on the prevalence of self-reported mental health conditions among post-secondary students or the accessibility of mental health services. RIWI gathered these data from February 2020 (before the COVID-19 surge in North America) until October 2020 (during the pandemic’s second wave). This allowed for comparison between different periods of the (mostly) online school year and the evolution of the pandemic.

It is not easy to gather reliable data on students’ mental health. For one, young people do not typically answer conventional surveys. Secondly, mental health stigma makes it difficult for students to answer honestly when they think that their responses can be traced back to them.  They are especially reluctant to share their experiences when linked to their university or college ID or to their contact information. Therefore, to gather accurate and reliable data on students’ mental health, we used a different approach. We used a technology that randomly exposes the questions to anyone online, and then asked whether they happen to be a post-secondary student. RIWI was able to hear from 6,055 anonymous students across Canada and the US. We do not collect personally identifiable information, which facilitates the sharing of feelings about socially sensitive topics.

This study builds on RIWI’s extensive experience collecting anonymous data on sensitive public health and mental health topics. An early peer-reviewed application of RIWI’s technology was measuring attitudes towards vaccination during the H1N1 flu pandemic in 2009. RIWI also conducted and published a world survey of mental illness stigma in 229 countries to benchmark the prevalence of the stigma attached to mental health conditions around the world in 2016.

The following findings include reference to behavior associated with deteriorating mental health, including self-harm and suicide.

Anxiety and depression were common before and during COVID-19 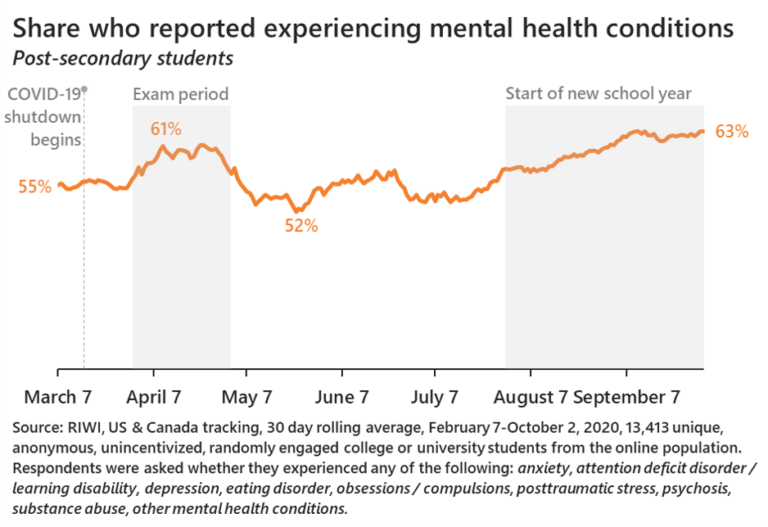 Method: Anonymous, and reaching out beyond typical survey respondents

RIWI randomly engaged a total of 2,850 Canadian and 3,475 US post-secondary students aged 17+ from February 7th to October 2nd, 2020 on a continuous 24/7 basis. RIWI gathered these data using a robust and unique technology that elicits responses from the broadest possible swath of the American and Canadian population in real-time – Random Domain Intercept Technology (RDIT). RDIT draws randomly from the entire Web-using population in the US and Canada on a continuous, 24/7 basis. Unlike traditional or online survey approaches, the technology’s algorithms ensure that anyone on the Web has an equal chance of being randomly exposed to the questions. Also, unlike government or school surveys, all data are gathered anonymously, reducing social desirability bias and eliminating a potential barrier to participation. Furthermore, respondents are not incentivized to participate in any way. We randomly engage a new, random set of unique respondents each day; we had no repeat respondents throughout the period. Despite a unique set of fresh respondents each day, the numbers of respondents were such that grouped results remained consistent.

A recent Toronto Star series highlighted some of the study’s findings in its November 2020 investigative series Generation Distress.

Researchers interested in accessing these data for publication or academic usage may contact Catherine Barker, at catherinebarker@riwi.com

If you wish to learn about the types of analysis on these data now being undertaken by University-based researchers, or to learn more about our data sets, please contact ask@riwi.com.

RIWI stands for “real-time interactive world-wide intelligence”. We provide access to continuous consumer and citizen sentiment in all countries. RIWI breaks through the noise to find the truth about what people really think, want and observe – by reaching the most diverse audiences, including the disengaged and quiet voices who do not typically answer surveys or express their views on social media. RIWI technology rapidly collects data in every country around the world and displays the results in a secure interactive dashboard in real-time. We only collect anonymous information: 229 countries and territories, over 80 languages and 1.6 billion interviewees and counting. For more information, please visit www.riwi.com.

RIWI is pleased to announce that it has entered into a definitive agreement to acquire Research on Mobile!   Learn More