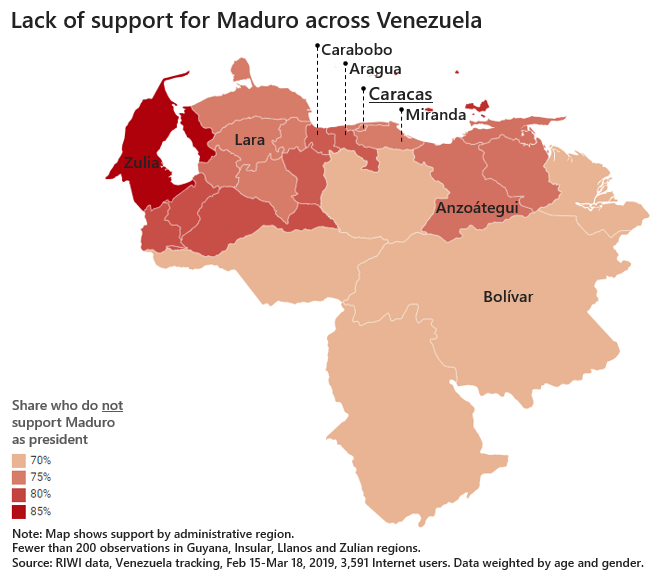 A large, broad-based, and consistent majority of Venezuelans believe that Nicolás Maduro: (a) should not be the President, and (b) is not the legitimate President.

Nicolás Maduro became Venezuela’s President for a second time in January, but is widely viewed as a dictator who has “crushed the economy, starved the people, strangled democracy and forced more than 3 million Venezuelans into exile”.

The US, Canada and many other countries view the opposition leader Juan Guaidó as the country’s legitimate interim leader. In late April and early May, Guaidó tried and failed to oust Maduro from office. Maduro claims he has broad support and refuses to cede power. Dozens have been injured in violent clashes between opposition and pro-government forces as citizens continue to flood the streets of Caracas to support Guaidó.

How much support does Maduro enjoy and how broad-based is it? To get a true read on what the public thinks in Venezuela beyond the protesters in Caracas, we used an innovative web-based technology that captures a broader range of voices than traditional methods. RIWI randomly engaged approximately 3,500 Internet-using Venezuelans on their views of the Venezuelan leadership from February 15 – March 18, 2019.

To continue reading about the broad-based lack of support for Maduro in Venezuela, click here.