The Takeaway: Despite the many escalations and de-escalations in China-U.S. tensions over the past year, RIWI’s large scale, broad-based sentiment data in China do not show that any significant anti-American consumer backlash took place, nor do they anticipate one in the near term. This is true across a range of products and services, week after week, with a fresh set of respondents, across age groups and regions, and consistent across both auto-detected respondent device data as well as self-reported future intentions.

The last year has been a roller coaster for China-U.S. relations. Amidst all of the tensions, was there, is there, or will there be a Chinese backlash against U.S. consumer-facing products and services?

There has been much concern in both the U.S. and China about the economic impacts of the trade and technology war. But when at RIWI we measure broad-based Chinese sentiment across a range of products and services and at large scale, we find little evidence that consumers are changing their behaviour. This is consistent across all regions of China, throughout all of the dramatic trade tensions, for both current and intended future purchases, and across all age groups including younger Chinese.

Let’s take smartphones, the most politicized consumer-facing product, to start. In December 2018, international media reported a growing boycott of Apple products in China after the arrest of Meng Wanzhou, Huawei’s Chief Financial Officer. They reported it again after a May 2019 U.S. executive order banned U.S. companies from using Huawei technology. Chinese social media posts compared the Huawei logo to a sliced-up apple, and talked about how embarrassing it was to be seen with iPhones. In May 2019, equity analysts at Citi cut their price targets for Apple, on the basis that iPhone sales in China could be halved due to the trade war. 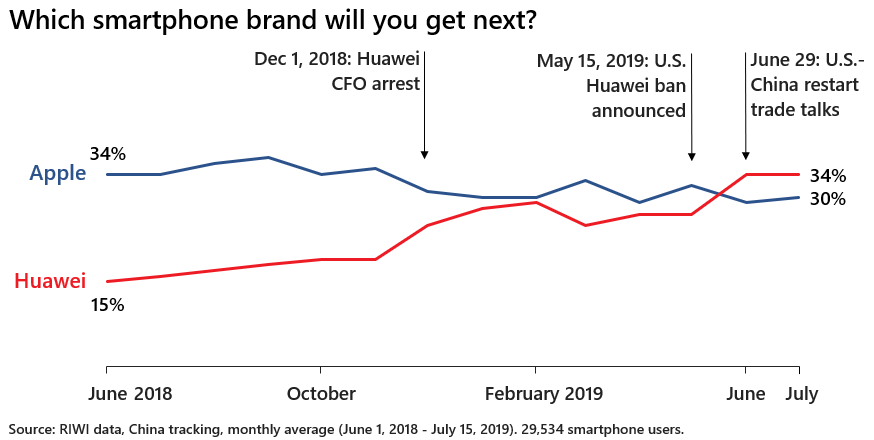 Is there any evidence to support a Chinese boycott of Apple? There are no iPhone unit sales data broken out for China, even after the fact, to be able to evaluate this claim. So we use RIWI’s Random Domain Intercept Technology to gather real-time data on both respondent device and purchase intentions. We randomly and anonymously engaged more than 29,000 Chinese smartphone users from June 2018, just before the start of the trade war, to July 2019. We gather these data without relying on social media signals, nor on paid survey takers that represent a narrow set of opinion1. Nearly 75 percent of RIWI’s China respondents have not taken a survey of any kind in the past month.

Are Chinese consumers turning away from Apple smartphones towards Chinese ones? The data show a clear rise in use and intentions to purchase Huawei phones after the December 2018 arrest of Meng Wanzhou, but only a small shift away from current or future iPhone use (see Chart). Huawei’s anticipated gains come not at the expense of Apple, but at the expense of other Chinese brands. Between June 2018 to June 2019, the number of those randomly exposed to RIWI’s survey from a Huawei device grew by seven percent, those landing from a Xiaomi phone fell by nine percent, and those on an Apple device fell by only one percent2.

To be sure, RIWI data show that those responding on iPhones were slightly less likely to report intending to buy an iPhone next in June 2019 than they were in June 2018. We also see that, in June and July 2019, intentions to buy a Huawei phone rise above Apple for the first time since the beginning of the trade war. However, when we look only at those smartphone respondents who plan to buy a new phone this year, intentions to buy Apple stayed flat, despite a dramatic year of tensions.

In short, these data show little evidence of a widespread, significant backlash against Apple iPhones today or in the near future. What about other consumer products and services? Our data show, so far, no major backlash against U.S. brands or destinations either. Every day, without mentioning a boycott, we asked a fresh, random set of Chinese respondents their views. Anyone online in China has a chance of randomly encountering these RIWI questions, offering a vast ocean of potential respondents representative of China’s online population (see Map), the world’s largest online population. 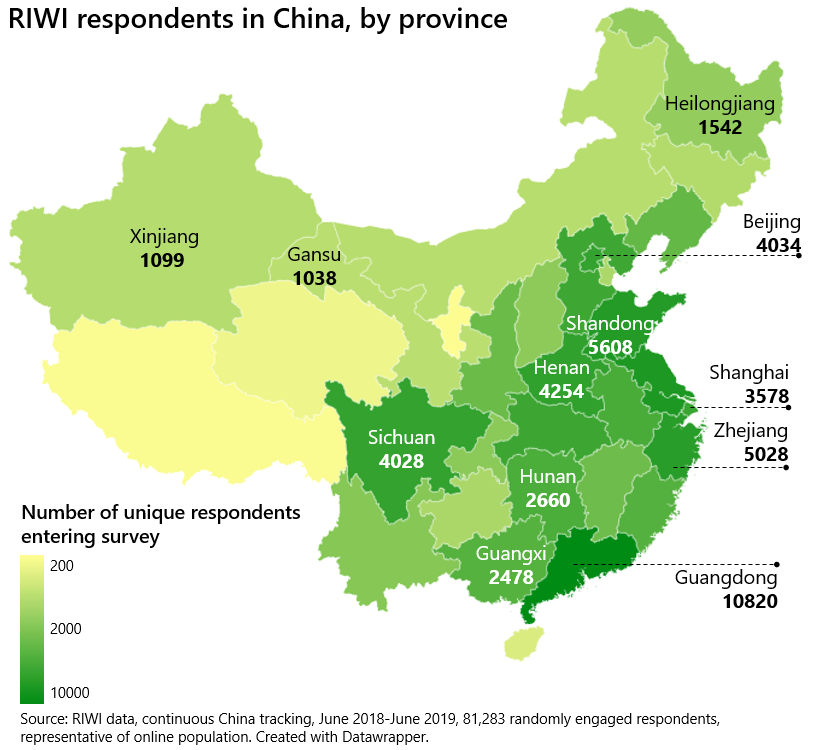 One in 10 out of nearly 40,000 respondents representative of China’s online population preferred to buy North American household products, consistent across both 2018 and 2019. This share remained the same before and after the May 2019 Huawei ban. The share that say they prefer North American electronics dropped slightly in May 2019 after the Huawei ban was introduced, but returned to its previous level in June.

Of those who go out for coffee, one in two Internet users over May 29 to July 15, 2019 usually get it from Starbucks, one in five go to McDonald’s, and one in six to China’s Luckin Coffee. Despite the trade tensions, one of every two respondents out of the almost 7,000 respondents during the 2019 NBA finals had a view on who would win the Finals MVP award. Sixty percent of 5,000+ respondents over May 29 to July 15, 2019 think that Tesla is a good brand. These views are broad-based across Internet users in all regions of China, across ages, and stable across time.

What about the impact of the June 2019 warnings by China of the risks of traveling to the U.S.? The latest available Commerce Department statistics show that Chinese travel to the U.S. has fallen by five percent in January to May 2019 compared to the same period in 2018 (in line with a weakening Chinese currency). What about after May and going forward? Starting on May 29, a few days before China announced its U.S. travel warning, we asked 13,000+ randomly engaged online Chinese about both their travel plans and their views on the best place to get an education. Of those that plan to travel, a consistent 17 percent said that they plan to travel to the U.S. next (see Table). A consistent 24 percent of those with an opinion felt the U.S. was the best place to educate young people.

The data don’t show a significant change in intentions over time for the U.S. on either of these questions, but we will continue to follow this as events unfold. In fact, we find that, over July 8-14, 2019 when we additionally asked 1,200 respondents about their most recent trip, the share of those intending to travel to the U.S. next (17 percent) was higher than the share of those who visited the U.S. on their last trip (13 percent).

Despite the many escalations and de-escalations in tensions over the past year, the data do not show that any significant anti-American consumer backlash took place, nor do they anticipate one in the near term. This is true across a range of products and services, week after week, with a fresh set of respondents, across age groups and regions, and consistent across both auto-detected respondent device data as well as self-reported future intentions.

The next time a major event occurs in the ongoing China disputes, there will inevitably be much noise and hype. We need to continuously challenge our assumptions with evidence so we don’t mistake noise for signal.

Note: A Canada-focused version of this piece was originally featured in the China Insiders Report published by the Canadian Embassy in Beijing on July 17, 2019. For a copy of the original report, email daniellegoldfarb@riwi.com.