As of March 8, 11:59pm Moscow time, more Russians believe military tensions will stay the same in the coming weeks, while more Ukrainians expect the conflict to de-escalate. Over two in ten Russians strongly favor Putin’s handling of the conflict, compared to nearly five in ten Ukrainians who strongly favor President Zelensky’s approach to the invasion.

We have been monitoring real-time citizen perception in Ukraine and Russia on a daily basis since February 16, across all major cities and regions of both countries. These data are gathered safely and anonymously and use a method that includes opinions from those who do not typically answer opinion polls. From February 16th through March 8 at 11:59pm Moscow time, we heard from a total of 5090 people in Ukraine and 5908 people in Russia on their perceptions of shifting Ukraine-Russia military tensions in the coming weeks.

In the lead-up to the February 24th invasion, the share of RIWI respondents that expected an escalation grew notably in both countries. Since the invasion, Ukrainian and Russian perceptions that military tensions would become more intense immediately declined and subsequently leveled-off. In fact, these perceptions are remarkably similar in both countries, with just over three in ten Ukrainian and three in ten Russian respondents believing that tensions will increase by March 8th. 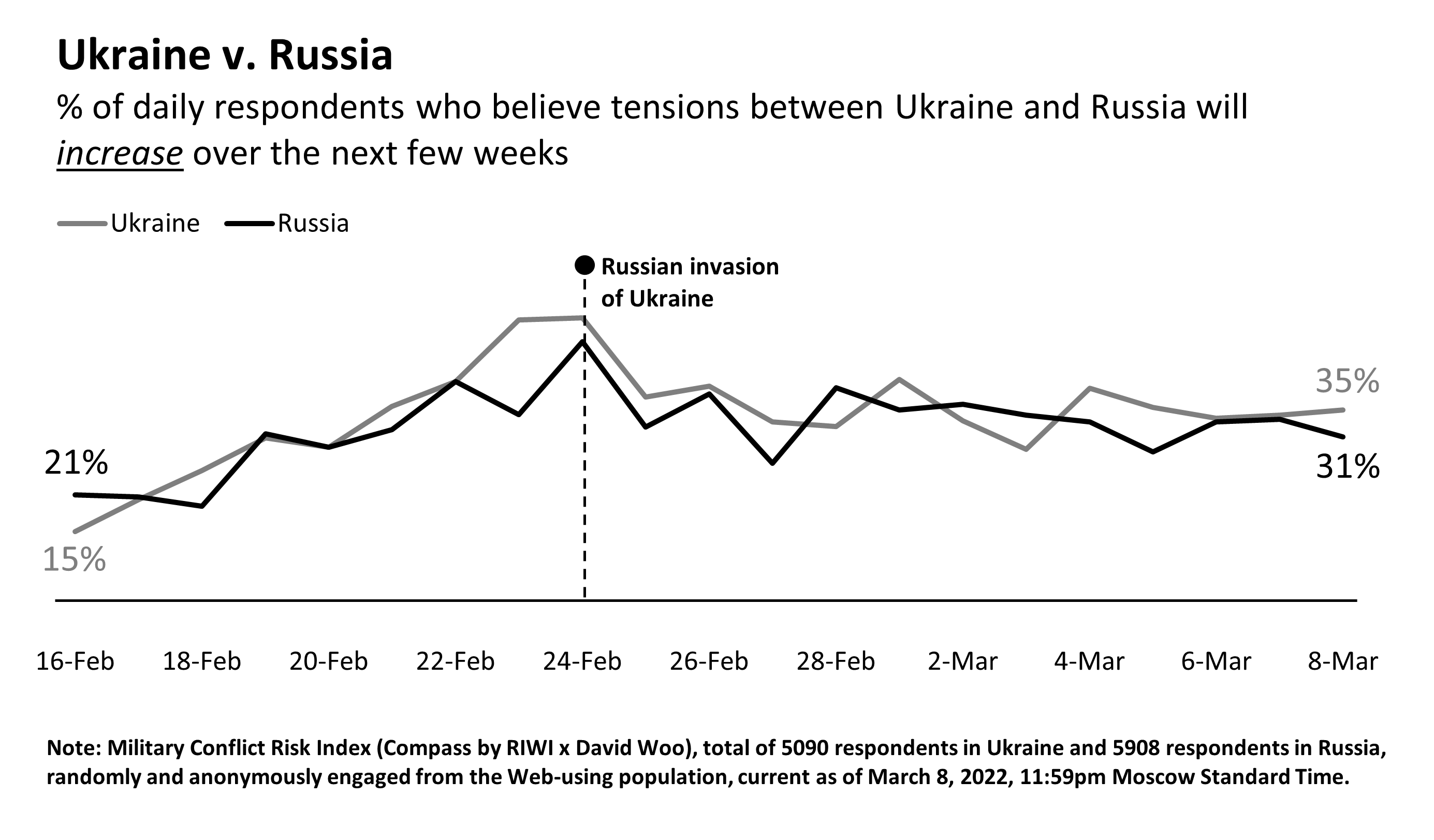 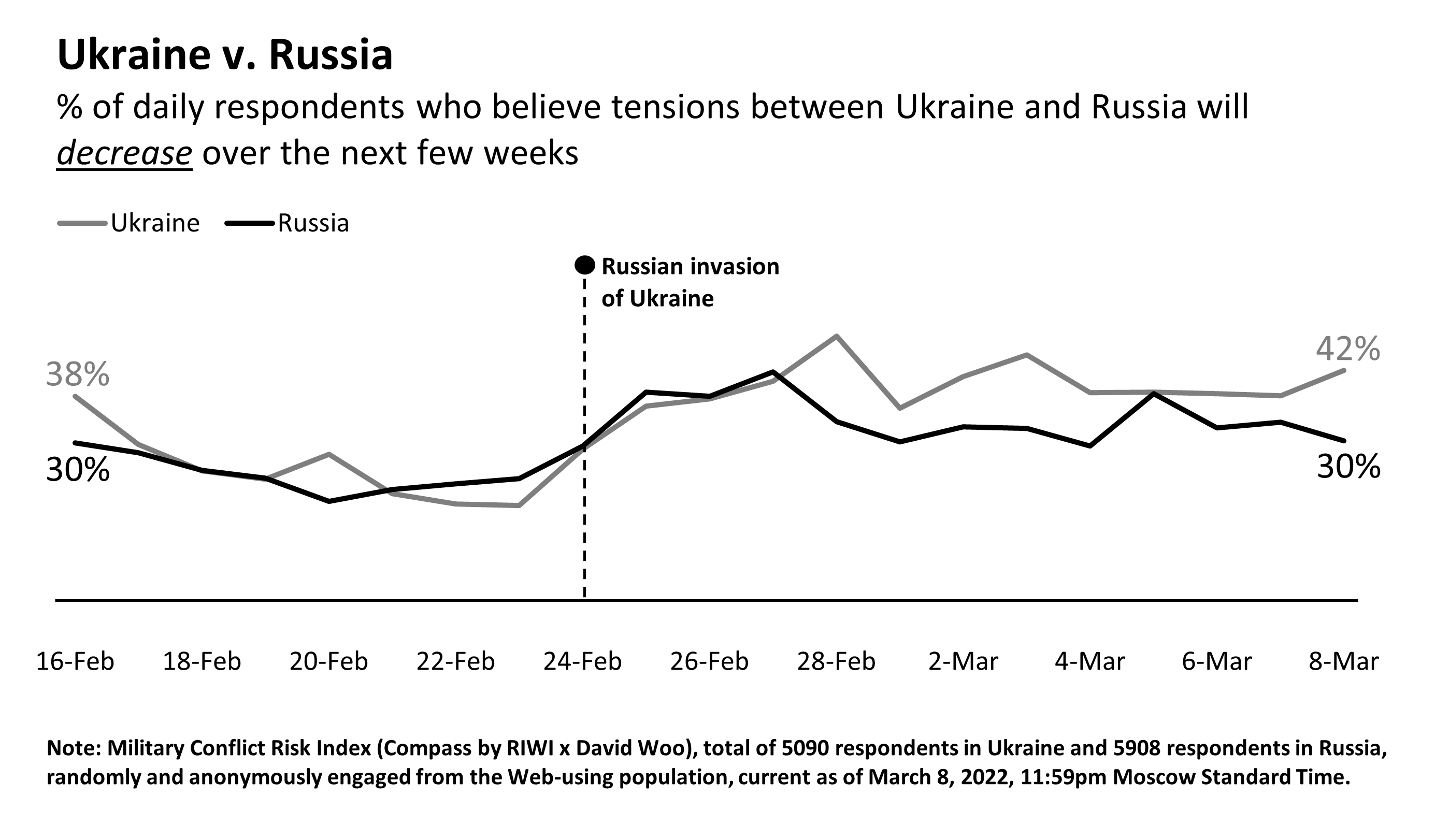 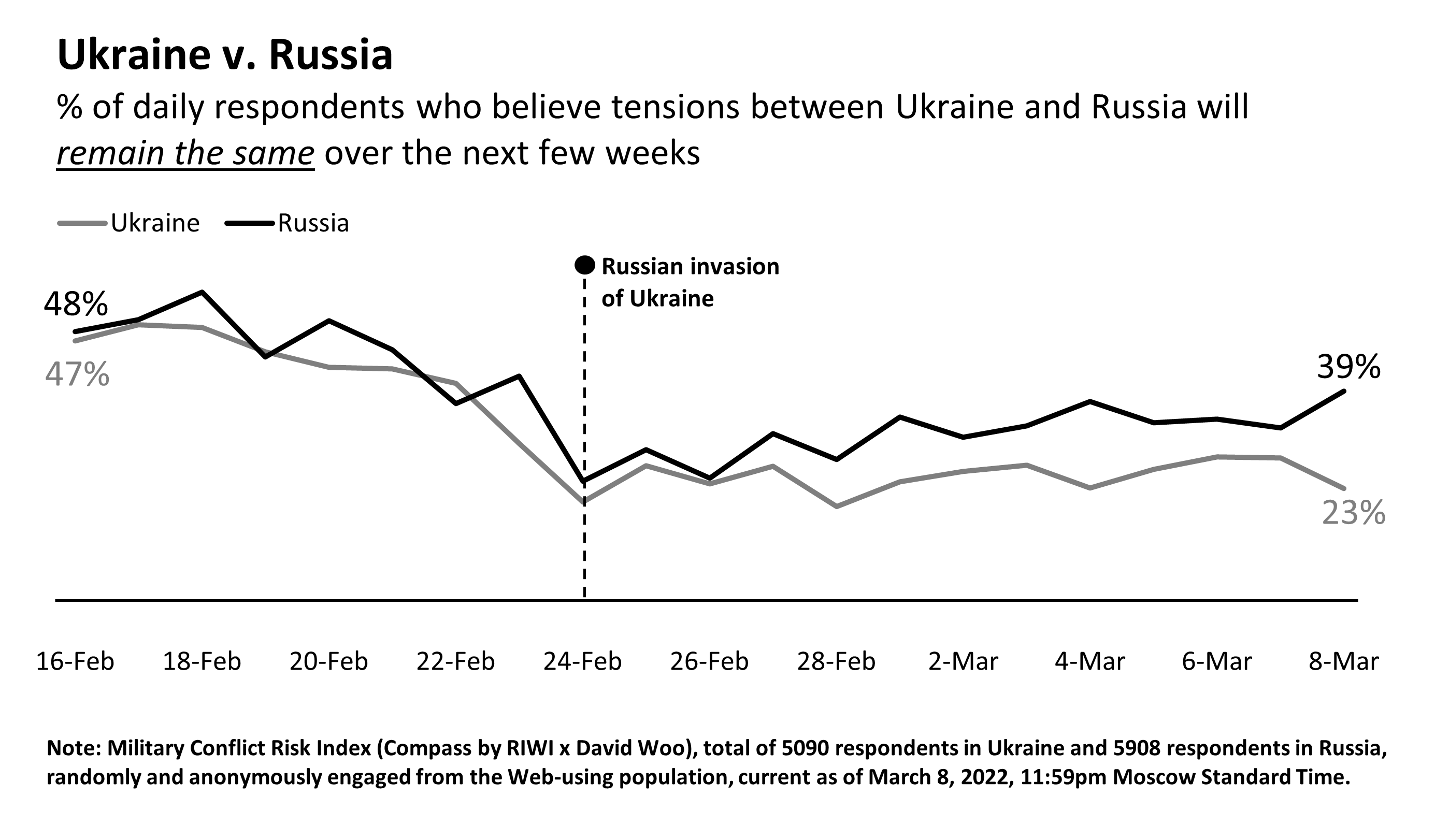 Although Russian and Ukrainian perceptions of forthcoming escalation have been very much aligned since the start of data collection, perceptions of forthcoming de-escalation and of maintained conflict began to diverge at the end of February. Since the end of February more respondents in Ukraine expect tensions to de-escalate relative to those in Russia. On the other hand, more respondents in Russia expect tensions to stay the same relative to those in Ukraine.

Starting on March 3, day 8 of the invasion, we asked those in Russia: “How do you feel about the Russian leadership’s current approach to the conflict with Ukraine?” From March 3-March 8, 11:59pm MSK, over two in ten of a total of 1920 Russian respondents reported strong support for Putin’s invasion of Ukraine, with an additional two in ten reporting strong opposition. Despite the crackdowns on anti-war protestors over the weekend and views that the war is not going well for Putin, these data remained relatively stable from March 3-8.

This polarization in self-reported support contrasts recent conventional public opinion polls that show strong support for President Vladimir Putin. Moreover, this suggests that anti-war demonstrations in Russia are not fringe, but rather reflective of opinions shared by a substantial share of Russians. Nonetheless, with a similar non-trivial share of Russians reporting strong support, it is clear that Putin is not yet under intense pressure to pull back. 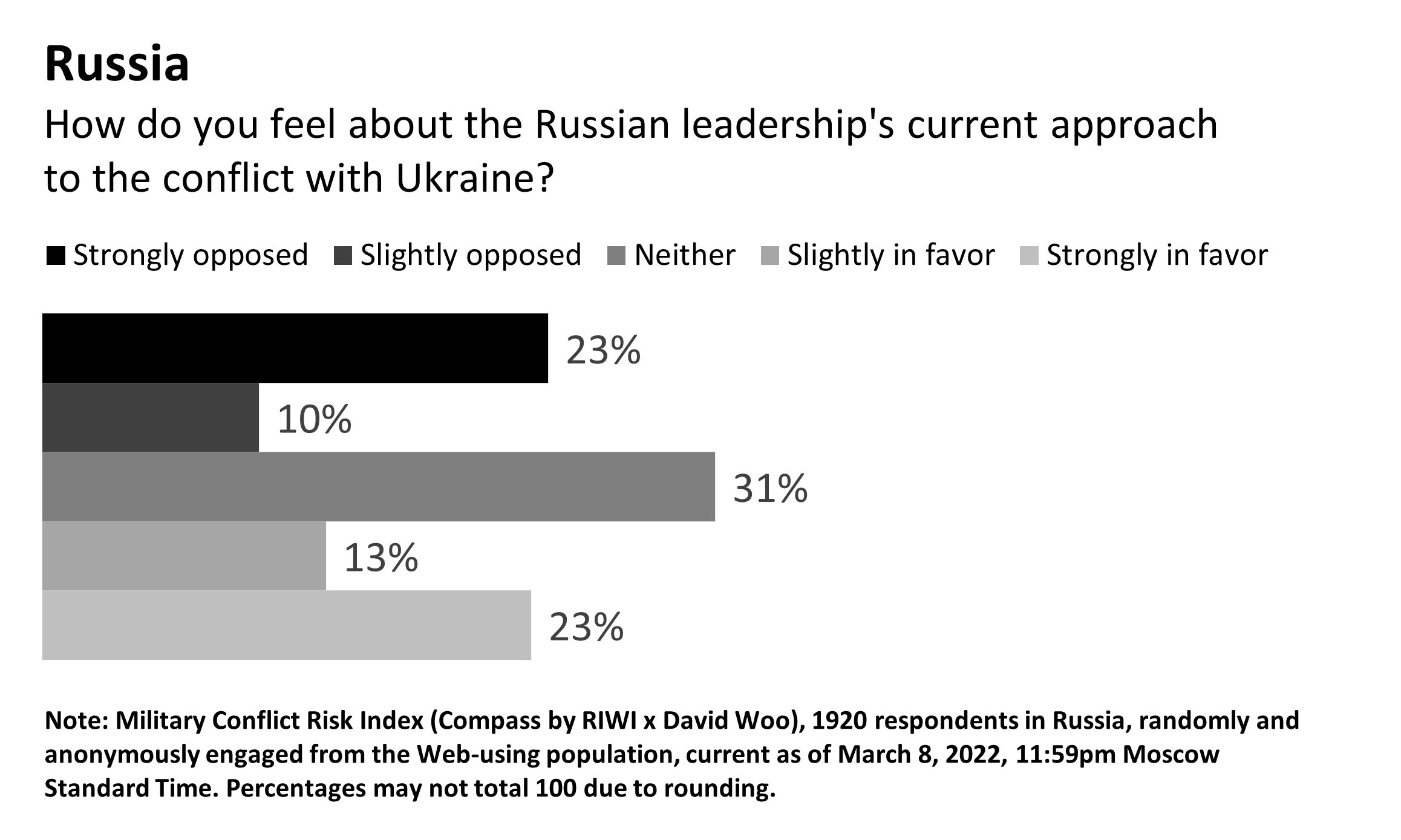 As a comparison, we asked those in Ukraine: “How do you feel about the Ukrainian leadership’s current approach to the conflict with Russia?” Nearly five in ten of a total of 1581 Ukrainian respondents reported strong support for Zelensky’s strategy, with nearly two in ten reporting strong opposition. 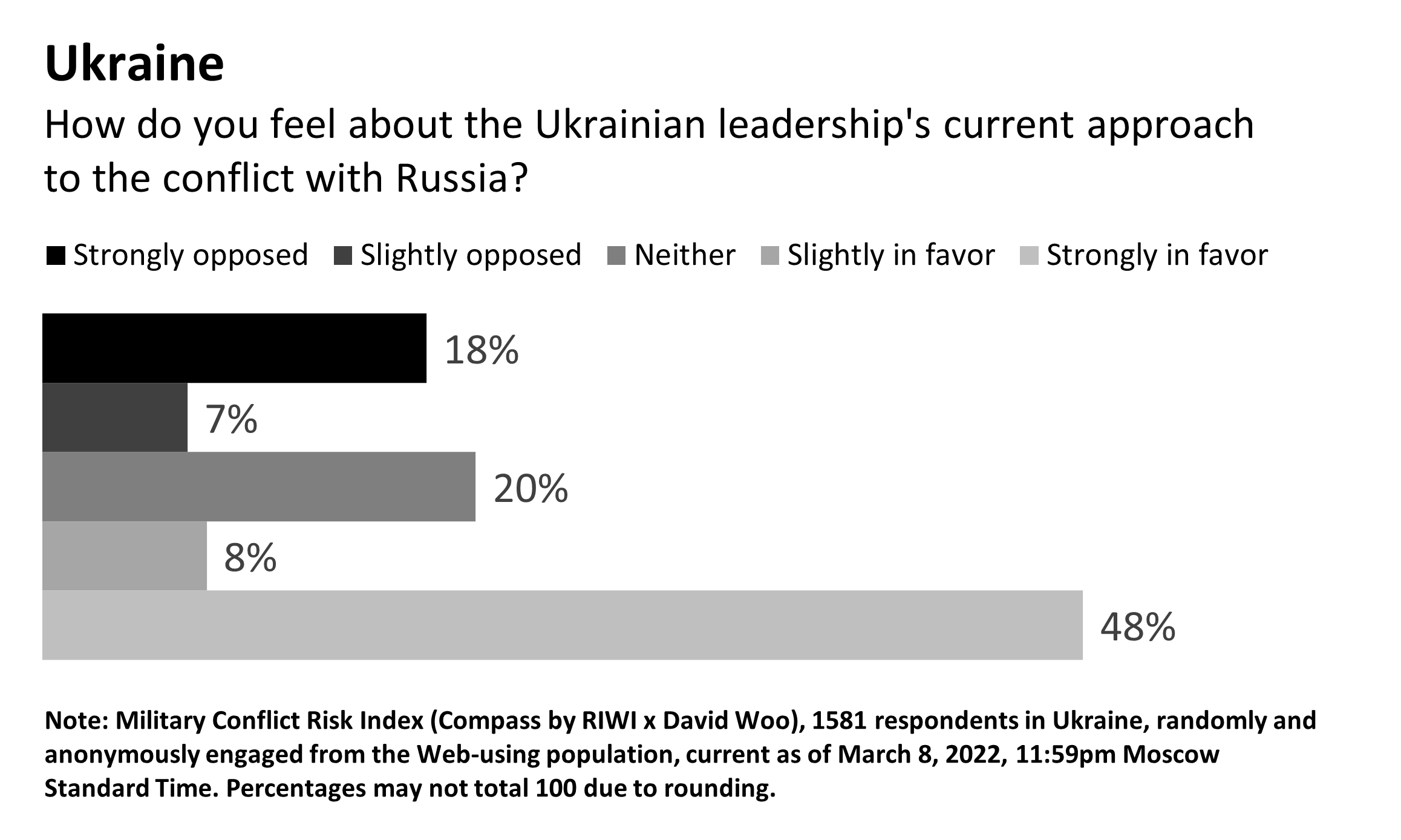 The data were gathered using RIWI’s Random Domain Intercept Technology, allowing us to access respondents across all regions of both countries, including those who do not typically share their opinion. To maintain the safety of respondents and maximize the chances of honest responses, we do not collect personally identifiable information. A more detailed description of our method and technology is available here.

We are tracking this continuously, and will be monitoring in the coming days and weeks whether, when, and where citizens perceive that the conflict will escalate or de-escalate, as well as trends in support for Putin’s approach to the conflict as it unfolds.

These data come from our new Military Risk Conflict Index (part of our new Compass Index series, a collaboration with David Woo, on the key global geopolitical, economic, and political risks of the day. The goal of the Military Risk Conflict Index is to safely measure, on a continuous, real-time basis, the collective perceptions of military conflict intensification from citizens in five major geopolitical conflict regions (Russia vs. Ukraine, Iran vs. Israel, China vs. Taiwan, India vs. Pakistan, and North Korea vs. South Korea).

In addition to these data, we are monitoring displacement and migration intentions among those in Ukraine. One and a half million people have already left Ukraine according to the UN agency responsible for refugees. RIWI March 3-8 data show that 17 percent of 1516 respondents still in Ukraine report that they have already left or intend to leave their home in the next month for either another place in Ukraine or another country.

For more information or to see the high-frequency or regional data, please contact Danielle Goldfarb, RIWI’s Head of Global Research, at