A new Polarization Risk Index shows that Americans, French and Italians perceive much more political division in their countries relative to citizens in Canada, the UK, Germany and Japan. Yet, in all countries citizens expect division to increase over the next five years. The data also indicate that Americans believe this political division threatens US stability. On an interpersonal level, Americans mostly still like and respect those who hold opposing views, but fewer report that they trust their political opponents. We plan to collect the data regularly to monitor for changes in polarization.

The preconditions for democracy are weakening within democracies themselves. In a new study of over 4,000+ respondents across the G7 countries, 56 percent of Americans, 51 percent of French people, and 50 percent of Italians believe that people in their country are very or extremely politically divided. This compares with 40 percent of Germans, 36 percent of Brits, 32 percent of Canadians, and 20 percent of Japanese. 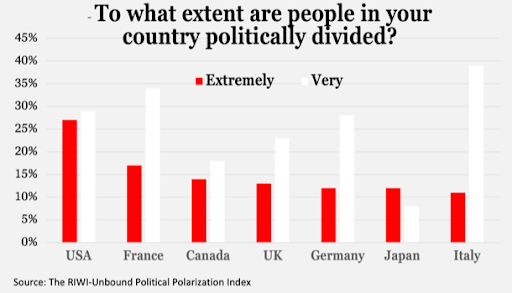 The same study finds that even in countries that are not polarized now, citizens in all of the countries expect division to increase. 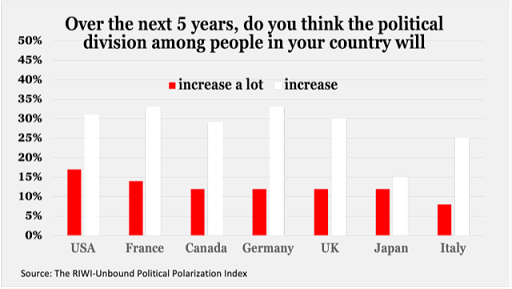 The data show that the US is the most unstable relative to the other countries in terms of polarization and 45% of citizens report that the current political division is a threat to US political stability. This will be important to monitor regularly in the lead-up to the US midterms and in the wake of widespread gun violence and the impending Supreme Court decision to overturn Roe v Wade. 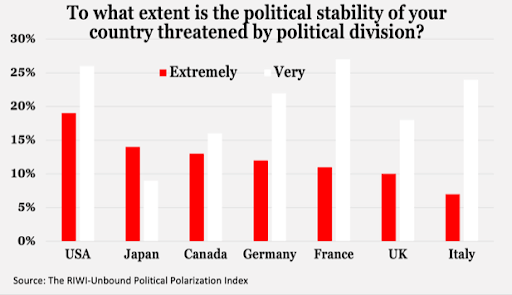 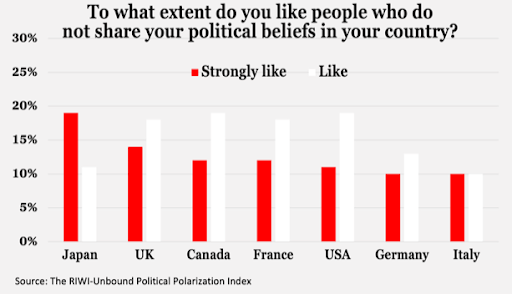 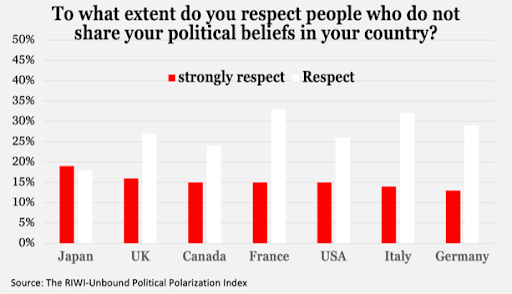 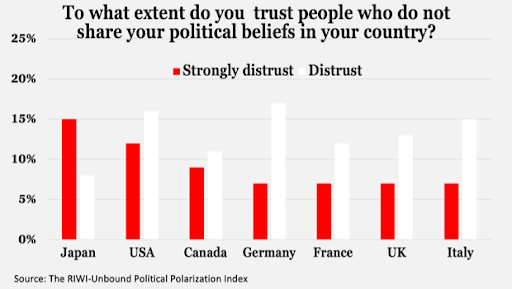 The Index includes answers to 12 questions about political division for a total of at least 4,000 responses, or 600 responses per country. Respondents from each G7 country are representative of the country Web-using populations, and insights are further weighted to population demographics. The data were collected between May 10 and 25, and the study will be repeated quarterly, allowing those monitoring geopolitical risk or developing foreign policy to continue to measure and monitor any further deterioration, especially in the lead-up to the US elections. A worsening at the interpersonal level could signify a major deterioration in stability.

This study is, to our knowledge, the first of its kind to collect quarterly, anonymous, independent, and broad-based data from citizens in the G7 economies about their perceptions of division within their countries and whether these divisions threaten political stability.

The data in the Polarization Risk Index draw on a unique technology which minimizes biases associated with typical survey methods. The technology, Random Domain Intercept Technology (RDIT), engages a broad swath of the Web-using population in each of the study countries on a 24/7 basis. The core concept behind the technology’s algorithms is that anyone surfing the Web has a random chance of exposure to the questions, which results in the inclusion of those who are not typically included in opinion polls. Individuals surfing the Web have a chance of landing on a dormant domain temporarily being managed by RIWI. RIWI then intercepts the Web user and presents them with a RIWI survey. Once exposed, RIWI validates the country of the Web user and delivers an appropriate survey. Also, unlike typical opinion polls, no identifiable information is collected (e.g., names, email) and no incentives for participation are provided. These security measures/methodological characteristics encourage individuals to respond honestly (avoiding social desirability bias and incentive bias).

For a subscription to the detailed data, see here.

The Polarization Index includes answers to the following questions:

1. To what extent are people in [country] politically divided?
a. Not at all
b. Slightly
c. Moderately
d. Very
e. Extremely

2. Over the next 5 years, do you think that the political division among people in [country] will:
a. Decrease a lot
b. Decrease
c. Stay the same
d. Increase
e. Increase a lot

3. To what extent is the political stability of [country] threatened by the political division among its people?
a. Not at all
b. Slightly
c. Moderately
d.Very
e. Extremely

4. To what extent do you agree or disagree with the following statement: People who do not share my political beliefs in [country] threaten the nation’s well-being.
a. Strongly disagree
b. Disagree
c. Neither agree nor disagree
d. Agree
e. Strongly agree

5. To what extent do you agree or disagree with the following statement: If I could, I would avoid interacting with someone who does not share my political beliefs in [country].
a. Strongly disagree
b. Disagree
c. Neither agree nor disagree
d. Agree
e. Strongly agree

6. What is the likelihood that you would end your relationship with a family member or friend who does not share your political beliefs?
a. Very unlikely
b. Unlikely
c. Neutral
d. Likely
e. Very likely

8. To what extent do you respect people who do not share your political beliefs in [country]?
a. Strongly respect
b. Respect
c. Neutral
d. Disrespect
e. Strongly disrespect

9. To what extent do you trust people who do share your political beliefs in [country]?
a. Strongly trust
b. Trust
c. Neutral
d. Distrust
e. Strongly distrust

10. To what extent do you agree or disagree with the following statement: My political beliefs are an important part of my self-image.
a. Strongly disagree
b. Disagree
c. Neither agree nor disagree
d. Agree
e. Strongly agree

12. To what extent do you expect government policies to change after the next election in [country]?
a. Not at all
b. Slightly
c. Moderately
d. Very much
e. Immensely

For media requests or to book a presentation on the latest Index results please contact compass@riwi.com.