Facebook’s cryptocurrency project Libra — and the associated impacts on banks, central banks, the global payments and trading system, and others — hinges on the widespread and global adoption of the digital currency, especially amongst young people in emerging markets.

To assess the likelihood of Libra adoption, we deploy a survey of 5000+ respondents in the U.S., India, and Nigeria, asking whether respondents are prepared to use money that has been issued by a technology company, and whether, if they own a business, they are willing to accept such money. 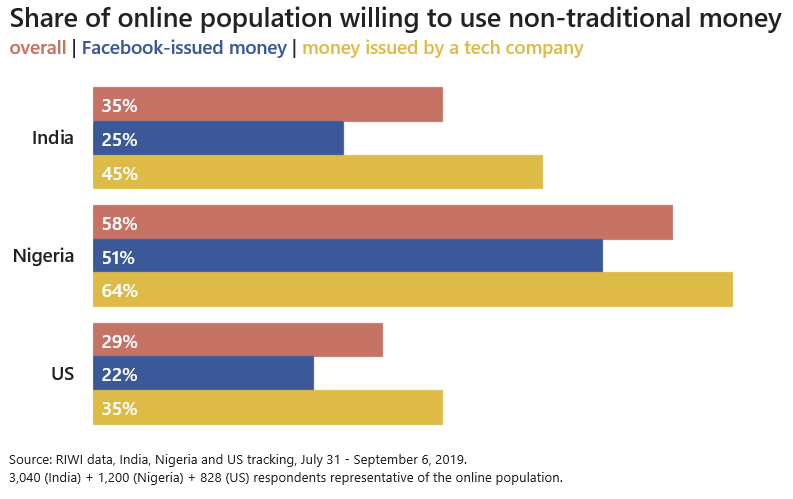 In order to assess the true likelihood of Libra’s success, we need to hear from those who represent the full set of potential adopters: anyone on the Web. We therefore use a survey technology that engages respondents randomly from the Web-using population. Unlike traditional survey approaches or other online survey approaches, the technology’s algorithms ensure that anyone on the Web in each country of analysis has an equal chance of being exposed to the questions. This results in a large number and share of respondents under age 35 (74 percent), those who have never taken a survey before (50 percent), and those without a bank account (41 percent).  This matters, among other reasons, because Libra’s success will hinge upon its adoption by young people in emerging markets, who represent a large share of the global online population.

Click here to continue reading the white paper written by Dr. Andreas Park, Associate Professor of Finance at the University of Toronto, and Danielle Goldfarb, Head of Global Research at RIWI.

This report was initially published on the Rotman FinHub website.