These RIWI data were featured on January 30 during the International SOS, Centers for Disease Control and Prevention, and APCO Worldwide webinar to Fortune Global 500 companies on how to protect their global workforce from the new coronavirus outbreak. 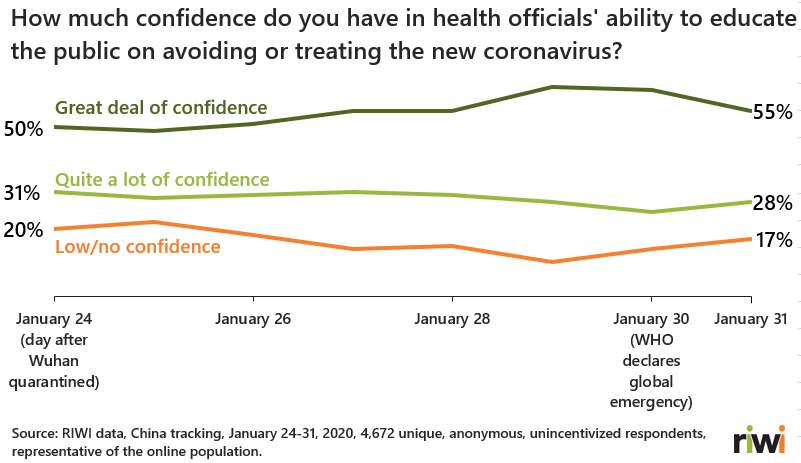 Past outbreaks such as the Spanish flu, which killed more than 50 million people in 1918-19, and the more recent H1N1, Zika, Ebola scares, teach us that the spread of misinformation among the public and a persistent lack of trust in public health authorities can dramatically increase the number of people put at risk during any outbreak. RIWI data and analytics on changing public trust in health authorities during fast-changing outbreaks such as H1N1, H7N9, Zika, and Ebola show that strong, broad-based trust in authoritative public health officials is essential to the task of ensuring that the public take proper protective actions.

To what extent does the Chinese population believe health authorities are transparent, cooperative and worth trusting? Is this changing during the course of the epidemic?

Since January 24, we used RIWI technology to randomly engage 4,600+ respondents from China’s Web-using population to answer this question. RIWI data are broad-based, come from across all regions of China (rural and urban), and draw daily from non-habitual survey respondents in real-time. RIWI respondents are un-incentivized, meaning that they answer because the questions seem interesting; they do not benefit in any way by responding.

Anyone using the Web in the country could be randomly exposed to a RIWI survey, resulting in the vast majority of RIWI’s Chinese respondents never or rarely taking prior surveys. This is unlike typical surveys in China that draw only on key urban centres and on habitual, incentivized survey respondents – or on content residing on censored social media. Unlike typical panel surveys, RIWI surveys are anonymous and do not collect personally identifiable information. These RIWI measures increase the likelihood that respondents will answer truthfully.

RIWI data show that 91 percent of Chinese respondents say they have heard of the outbreak. This figure increases to 98 percent in Hubei province (home of Wuhan, the epicentre of the outbreak). These data are consistent across the eight days of data collection, with new unique random respondents daily.

Those who are aware of the outbreak say they are largely confident in health officials’ ability to properly educate the public on how to avoid infection or how to treat it if infected. This is consistent across all regions of the country and age groups; confidence has increased from 81 percent to 83 percent. However, on January 31 we see a drop in confidence after WHO declared the new coronavirus a global health emergency. We might expect people in China to exhibit social desirability bias; they may want to make statements consistently supportive of the Chinese authorities, but an increase over five days suggests validity in our confidence signal. Having said that, a minimum of 21 percent of the respondents say that whenever they hear news about 2019-nCoV or any virus outbreak – whether this news is from state media or from public health officials – they question its truthfulness. It is unclear from this early finding as to whether this reported distrust hampers efforts to educate the entirety of the Chinese public, or whether it represents a general skepticism of news sources of all kinds irrespective of the topic.

Note that these RIWI data provide a signal about public trust in health authorities, a key factor in determining the spread and duration of an outbreak; the data do not tell us whether the authorities, at the provincial or regional level, are handling the outbreak effectively, nor how long the outbreak will last, nor how widely it is likely to spread within China and across the world.

RIWI is simultaneously tracking public trust in health authorities during the 2019-nCoV outbreak in other regions, including in the United States and in Hong Kong. In Hong Kong, our preliminary data reveal a different story than in the rest of China: one of greater skepticism and mistrust of the health authorities. We will continue to track these and other new elements in real-time and by region of China, and across countries, as the situation unfolds.

How significant an impact will the 2019-nCoV Outbreak have on the Chinese economy? What will RIWI data reveal about the impacts of the outbreak for the global economy?

At a time when the Chinese economy is struggling as a result of the China-US trade war and decelerating domestic consumer spending, how significant will the impact of the virus and the dramatic containment measures that the government has initiated be on the Chinese economy, and on the global economy?

RIWI employment and wage data confirm that the Chinese economy was showing more positive growth signs in the last few months of 2019. Chinese stimulus measures are due to kick in in early 2020, but to what extent will the new virus override their intended impact? Since 2018, RIWI has been monitoring and validating a range of official and other economic indicators across all regions of China. These include RIWI data that capture employment trends, intentions to travel, and consumer spending intentions. With almost 50 million people quarantined and the virus spreading to all parts of China, RIWI is monitoring real-time changes in these indicators as a result of 2019-nCoV.

RIWI is a global trend-tracking and prediction company, and a leader in data quality, privacy, and security (see here for more information). RIWI technology is used extensively and under long-term agreements by BofA Securities, the U.S. State Department and by other G7 government agencies, the World Bank, UN agencies, and by academics at top Universities such as Harvard and Oxford. RIWI has won several awards for its global trend-tracking and predictive analytics technology, including the “Rising Star” award for its China data at the 2019 Battle of the Quants in New York City. Independent validation shows that RIWI data are highly predictive of headline Chinese economic indicators such as the official manufacturing Purchasing Managers Index1., as well as headline US economic indicators such as non-farm payroll surprises.

Accurate, reliable data depend on hearing from a broad array of random voices. RIWI technology reaches the broadest possible set of potential survey respondents, drawing in populations otherwise not included in data collection, especially in monitored information environments. In China and globally, RIWI captures views of respondents representative of the Web-using population. RIWI’s randomized respondent-engagement approach gathers broad-based sentiment from across all of China, including urban and rural regions, and from across age groups. RIWI respondents remain anonymous and RIWI does not collect, process, store or transfer personally identifiable data, allowing respondents to provide their views freely and securely, reducing social desirability bias. RIWI respondents are not incentivized to participate in RIWI surveys in any way. Respondent numbers can vary by question. 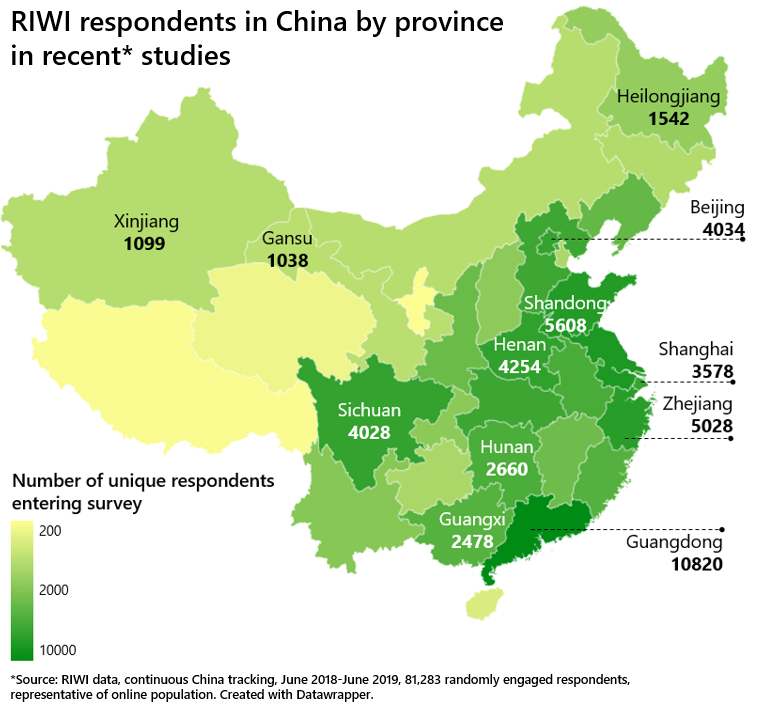 To learn more about RIWI’s data tracking in China and all countries, please contact: