Is there really an NBA backlash in China?

By: Jason Cho and Emily Kuzan

RIWI data, gathered anonymously from 1,800+ Chinese respondents online across all regions of the country, does not signal a dramatic backlash by Chinese citizens against the NBA. 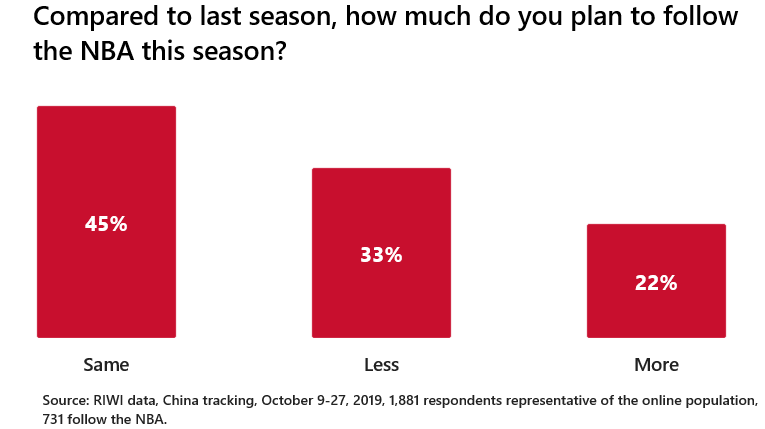 On October 4th, Houston Rockets General Manager Daryl Morey tweeted his support for the pro-democracy protesters in Hong Kong, reportedly sparking broad outrage against the NBA in China. Four days later, China Central Television (CCTV) pulled the broadcast and media events of all NBA pre-season games. Since this time, China’s state broadcasters have reduced their anti-NBA rhetoric. Tencent has carefully curated basketball content on its streaming platform during the first week of the season. NBA fans in China can also read discussions about the games on Weibo’s Twitter-like service.

In the midst of the US-China trade war over the past 17 months, RIWI has previously reported on whether there was, is, or will be a Chinese backlash against U.S. consumer-facing products and services, including backlash of the NBA during the 2019 Finals. Now we ask, will there be a sustained backlash against the NBA over its members’ support of Hong Kong protesters? To what extent are the international media reflecting the true degree to which the Beijing-sponsored backlash has dented actual Chinese viewing habits of the NBA?

We randomly engaged 1,881 respondents from China’s Web-using population starting on October 9th. The population RIWI exposes forms a mirror of the Web-using public. Anyone using the Web could be randomly exposed to a RIWI survey, resulting in the vast majority of RIWI’s Chinese respondents being non-habitual survey respondents (60 percent have never taken a survey before). This is unlike typical surveys in China that draw on only key urban centres and habitual, incentivized survey respondents – or on censored social media. RIWI surveys are completely anonymous, which increases the likelihood that respondents will answer truthfully, minimizing the potential social desirability bias.

China is the largest international market for the NBA. In our study, 39% of respondents indicate that they currently follow the NBA. We asked NBA followers whether they plan to follow the NBA more, the same, or less compared to last season. A third of fans indicated that they will be following the NBA less this season, while two-thirds say they will be following the NBA the same amount or more. The question did not reference any news related to the NBA’s embroilment in Chinese politics to minimize social desirability bias.

Often referred to as “China’s team”, the Houston Rockets gained popularity in China after China’s Yao Ming was drafted No. 1 in 2002. To see if Daryl Morey’s tweet had a significant impact on the Rockets’ popularity, we asked those who said they watched the NBA which team is the most popular amongst their friends and family. We asked about friends and family rather than personal preference to reduce the chance that respondents answer in line with what they think the government wants them to say. 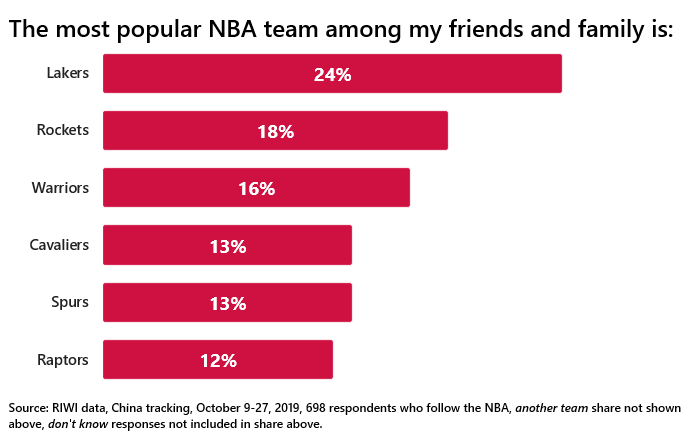 The data show that the Houston Rockets are not the most popular team in China and their popularity has been sliding in recent weeks. Over the course of 3 weeks, Rockets’ popularity dropped by 6 percentage points. However, this drop is not as dramatic as one might expect if there was actually a serious backlash or boycott against the Rockets.

RIWI data also do not signal a dramatic backlash by Chinese citizens against the NBA… for now, though the Houston Rockets are slightly less popular among Chinese fans. As the season unfolds, RIWI will continue to monitor whether interest in the NBA weakens.