By the time the World Health Organization declared COVID-19 a pandemic1 on March 11, 2020, global economic growth was stalling, and financial markets were collapsing. This blog highlights public confidence in China and the US in response to measures implemented by Chinese and American authorities. RIWI collects high-frequency, anonymous, and continuous survey data from Chinese and American online populations to assess public confidence.2 As of March 22, Chinese are far more confident of their government than Americans, though confidence in US officials is increasing.

RIWI engaged more than 23,000 Chinese Web users, including 800 from Hubei province,  aged 14 and over, randomly and anonymously from January 27 to March 22, and 2,200 US Web users, from March 9 to 22 (data collection is still ongoing). Roughly 3,000 Chinese and 1,100 Americans were asked the same set of questions each week to ensure the data were consistent. No personally identifiable information was collected, stored or transferred, nor could any personally identifiable information be inferred from any data collected. The data are representative of the Web-using population in China and the United States.

Not surprising, a significant share of Chinese worry about the COVID-19 outbreak (figure 1). But as the number of newly confirmed cases has substantially declined, and as the number of recoveries from the virus has increased, people are becoming less nervous. The share of people worried about the COVID-19 outbreak dropped from 72% in late January to 59% by late March. 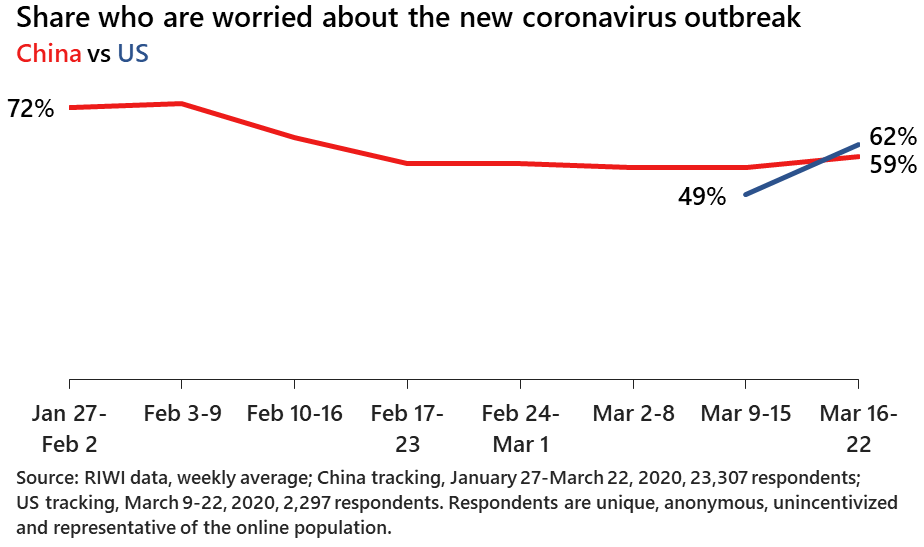 Perhaps surprising, even though most Chinese worry about the outbreak, respondents show consistently high levels of confidence in the nation’s ability to control the virus (figure 2). This is true even in Hubei in which respondents reported confidence levels around the 90% level throughout the outbreak. As is well known, China imposed severe measures, including community lockdowns, to arrest contagion. A strikingly large portion of Chinese think the situation will improve in the next week. Even between January 27 and February 2, when on average more than 2,000 cases were newly confirmed each day, the share expressing confidence was 81% and it later rose to 93% (figure 2). This was only one week after Chinese experts acknowledged, on state media, human-to-human transmission and Wuhan, a city of about 11 million, was locked down. Overwhelming confidence in Chinese health officials may explain the strong belief that the situation is improving (figure 3). 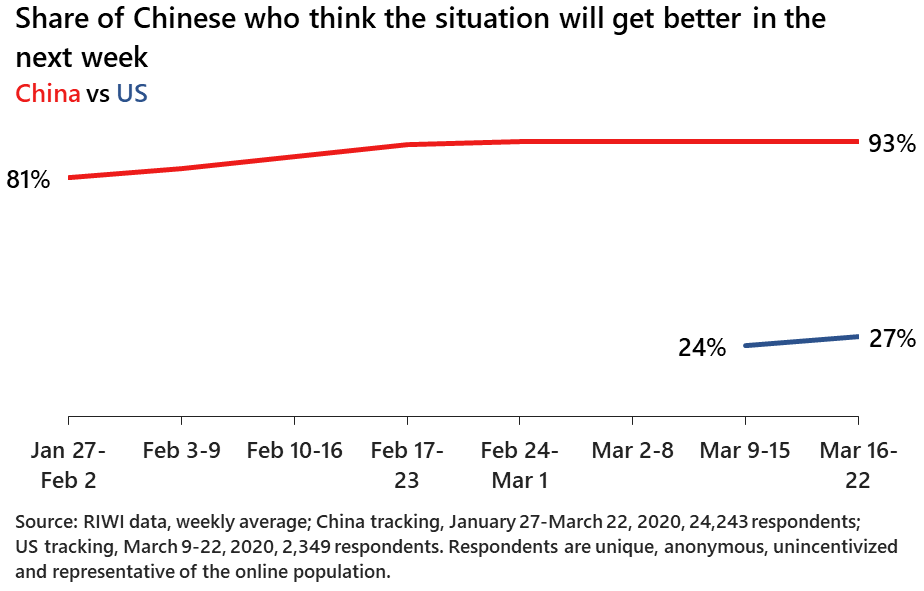 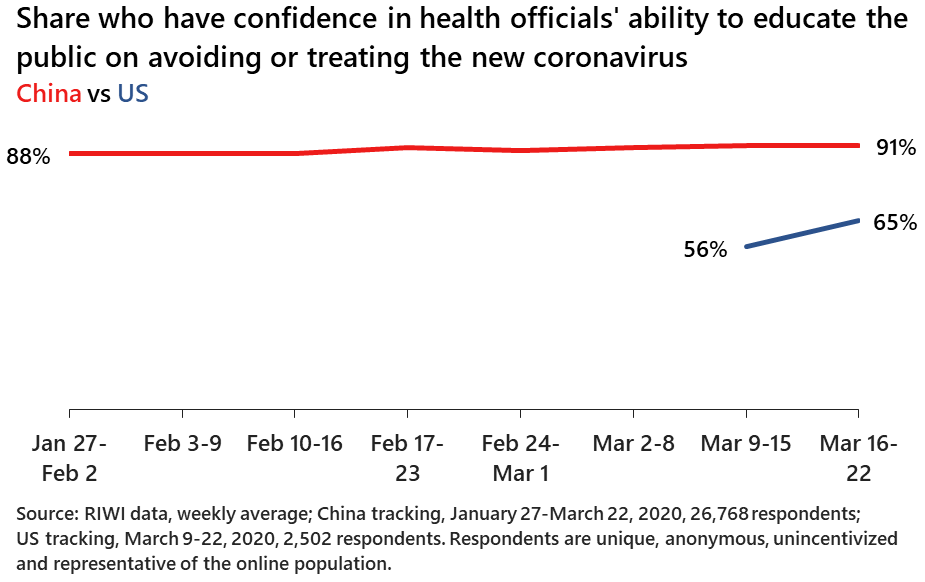 Correspondingly, RIWI data on consumer confidence in China has only shown a slight deterioration.3 Stock market losses, as of mid-March, were substantial but not extreme. The Shanghai Composite Index (SHCOMP) dropped almost 8% on February 3, 2020, when the market reopened for trading after the Lunar New Year break (figure 4). The index then recovered somewhat before a 4% drop at the end of February and two 3% drops in the middle of March. All in all, the shocks to the SMCOMP from COVID-19 in early 2020 were like the shocks from the trade war in 2018/19. As China shifts focus from controlling the outbreak to resuming economic activity nationwide including Hubei province, business and consumer confidence should rise, and hard-hit consumer and service sectors should rebound. In early March, the OECD4 expected Chinese GDP growth to be 4.9% in 2020, after a sharp downturn in the first and second quarters of the year. More recent estimates are in the 1% to 4% range for all of 2020.

While China nears the end of the initial outbreak phase, these are still early days for the United States and many other countries. Contrary to China’s centrally coordinated, harsh and targeted responses once the Wuhan epidemic got the attention of Beijing, US responses, until President Trump’s declaration of a national emergency on March 13, were decentralized, relatively mild and diffuse, and public confidence was low and going lower. America’s level of confidence in its health officials is only about two thirds the Chinese level. The share of confident Americans stands at 65% in the week ending March 22 (figure 3). The share of American respondents worried about the outbreak rose from 49% during March 9-15 to 62%  during the week of March 16-22 (figure 1), after President Trump’s national emergency declaration on March 12. Americans’ outlook on the outbreak remained pessimistic in the week of March 16-22, with only 27% believing  the situation will improve in the next week, up 3% from the week prior. The stock market rout started in early March (figure 5) and the S&P 500 index slid into “bear market” territory (down more than 20% from its all-time high) on March 11. A sharp rally followed President Trump’s declaration, but the market again plunged and later almost wiped out all stock market’s gains since Trump took office. Bank economists expect a sharp US recession in 2020,5 and the IMF expects a global recession.

To confront the economic crisis, the Federal Reserve6 slashed the federal-funds rate to a range between 0% and 0.25% and launched an unlimited quantitative easing and financial guarantee program – the eventual amount could be several trillion dollars. Congress passed two multi-billion emergency coronavirus response packages.7 President Trump’s declaration of a national emergency on March 13 freed up $50 billion to fight the virus.8 At this writing, Congress is debating a new $1.8 trillion rescue program for unemployed workers and distressed firms.  In Europe the other epicenter, governments have announced tough measures and various fiscal stimulus. G20 finance ministers and central bank governors stand ready to introduce fiscal and monetary measures.9 If COVID-19 eventually infects 40% of adults — a conservative estimate offered by epidemiologist Marc Lipsitch at Harvard10 — the demand for fresh installments of public support for workers and firms could be renewed in the summer of 2020 and beyond.

*Gary Clyde Hufbauer is currently a Nonresident Senior Fellow at The Peterson Institute for International Economics and was the Institute’s Reginald Jones Senior Fellow from 1992 to January 2018. He was previously the Maurice Greenberg Chair and Director of Studies at the Council on Foreign Relations (1996–98), the Marcus Wallenberg Professor of International Finance Diplomacy at Georgetown University (1985–92), senior fellow at the Institute (1981–85), deputy director of the International Law Institute at Georgetown University (1979–81); deputy assistant secretary for international trade and investment policy of the US Treasury (1977–79); and director of the international tax staff at the Treasury (1974–76).