How quickly will China’s economy recover from the COVID-19 outbreak?

What does high-frequency sentiment data say about the likely speed of China’s economic recovery from the COVID-19 outbreak? It is clear that China has gone through a negative economic shock. But how deep, long-lasting, and widespread will it be?

RIWI daily data representative of China’s online population show that several measures of Chinese consumer and business sentiment have worsened relative to the pre-outbreak period, but these are still not (yet) much worse than during 2018/19, and Chinese citizens report being extremely confident the outbreak situation is improving.

What can high-frequency sentiment data tell us about the likely shape of the recovery?

Everyone agrees that there is and will be a negative impact on the Chinese economy from the COVID-19 outbreak.

What is clear is that people had not returned to usual economic activity levels as of the end of February 2020, and there was significant disruption to those activities during the month. Recent data such as February’s purchasing managers’ indices (“PMI”) coming out at historic lows, declines in air pollution and traffic volumes in major cities in February 2020 relative to the same period last year confirm that business and consumer activity has been severely disrupted and not yet returned to normal (although many are working remotely or making online purchases).

What is not yet clear is how deep that negative impact will be, how widespread, and how long-lasting. What is also unclear is whether official data will accurately capture the extent of the negative impact, as China’s economic statistics are unreliable1. The size of the economic impact of the outbreak on China matters not only to China but also critically to the global economy, given the extent of travel, trade, and supply chain connectivity between China and the rest of the world.

Official Chinese economic data are only available with a lag; apart from the February PMI most key indicators will come out at or after the end of March 2020. In the meantime, some analysts are focusing on high frequency, daily supply-side data that proxy for economic activity – such as power plant coal consumption and pollution levels. These tell part of the story. What is less clear but important for determining the speed of economic recovery is how people are feeling about both their economic prospects and the outbreak situation and how quickly their demand will return to normal levels2. This is a key missing piece driving a lot of the uncertainty around forecasting and the focus of RIWI’s data collection efforts.

RIWI gathers high-frequency, daily data on a range of economic sentiment and behaviour measures, generated from randomly engaged Web users across all regions of China, and both urban and rural, since the start of the trade war in June 2018. This allows us to monitor certain aspects of sentiment now in real-time before official and other data become available, to provide an alternative gauge as a check on official data, and to provide alternative indicators not otherwise available. In addition to continuous tracking throughout all of China including all provinces, on February 5th we launched an additional separate study that added additional daily responses from Hubei province, including the city of Wuhan, to enable us to assess whether the impact on the rest of the country is as severe as that seen in Hubei.

RIWI technology works such that anyone online in China on any device at any time of the day has an equal chance of being randomly exposed to RIWI questions. This allows RIWI to gauge broad-based sentiment among the world’s largest online population, and beyond typical surveys or “walled gardens” of social media. Unlike in typical surveys, the vast majority of RIWI respondents in China have never answered a survey before. All data are gathered anonymously.

Despite growing news headlines about public anger in China, RIWI’s daily data from January 24-March 2, 2020 show extremely strong and consistent confidence among the Chinese people that the outbreak situation will get better and is being handled well. As of March 2, 94 percent self report that the situation will get better next week3, steadily growing in recent weeks, coincident with the number of new COVID-19 cases in China declining. 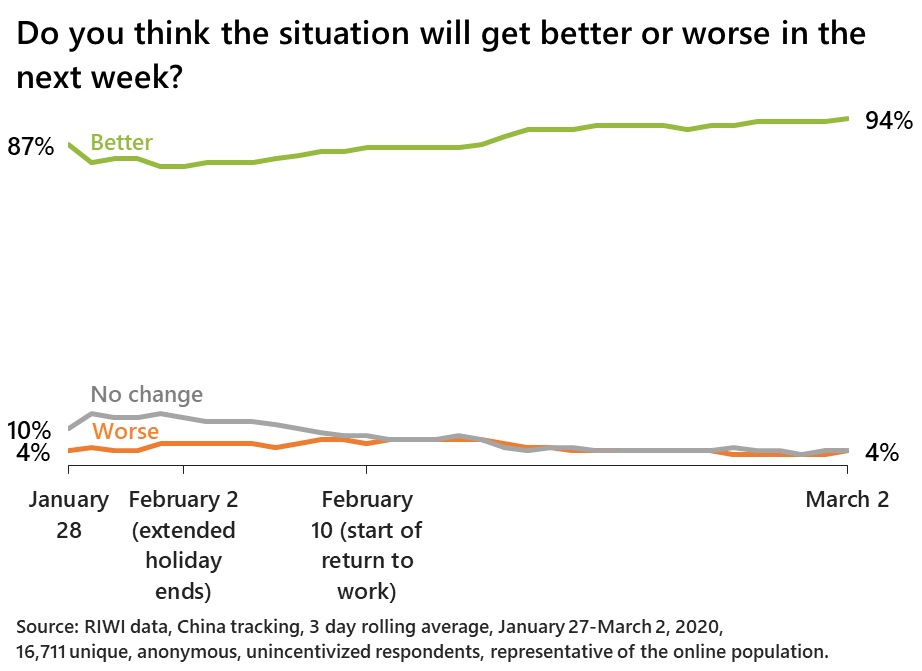 This level of optimism is largely consistent across all regions of China. Even in Hubei province, in the two weeks ending March 2, 89 percent report that the coronavirus situation will improve next week, the lowest reported level of optimism. The rest of the central region, and each of the western, eastern and northeastern regions all report confidence of over 90 percent over the same period4.

Consumer confidence is down, but not so far off from last year’s levels

RIWI’s broad-based, daily sentiment data in China show that consumer optimism has dropped from when the outbreak became public until March 2. 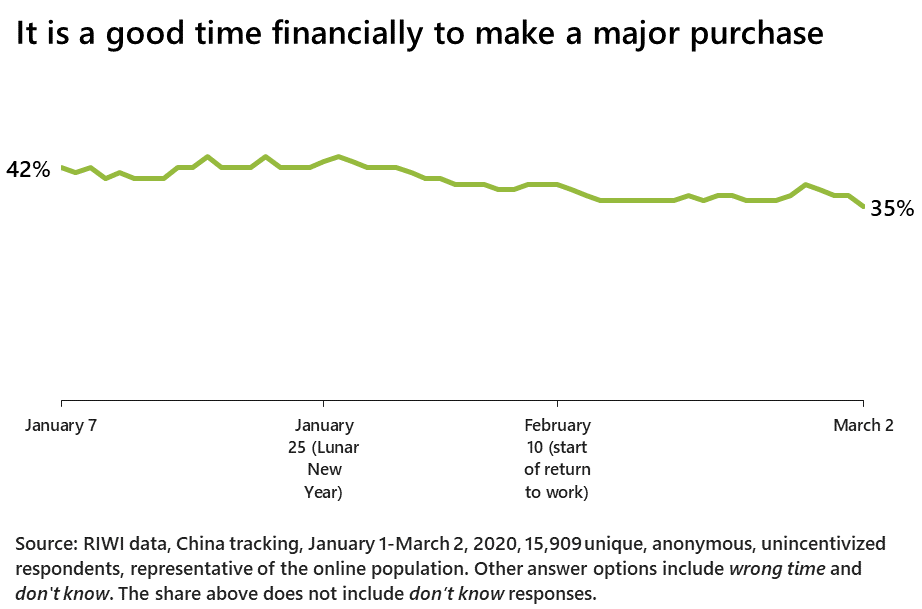 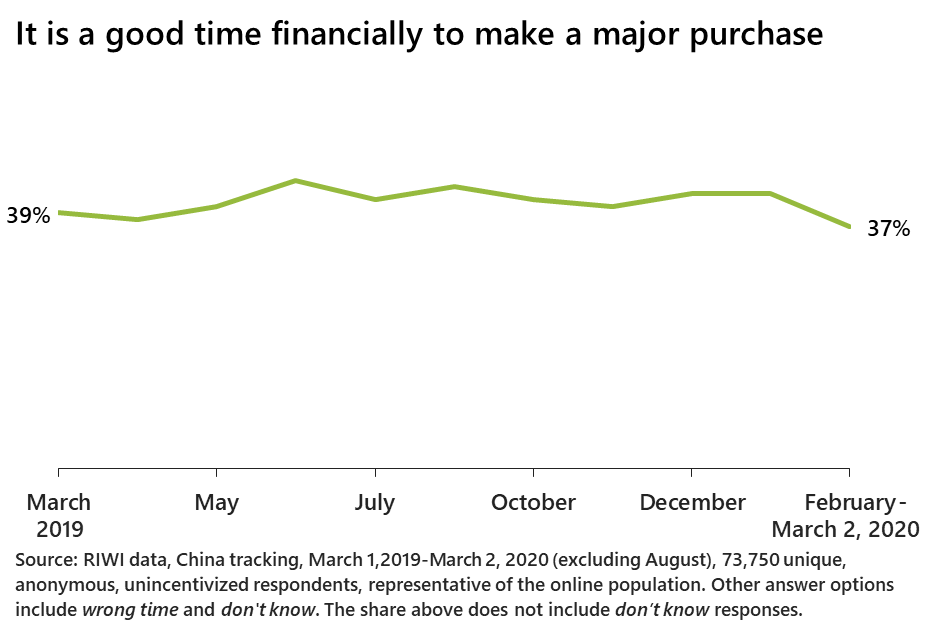 Confidence doesn’t necessarily translate into actual spending when one’s ability to act on that confidence is limited; citizens are not all fully back to work or engaged in regular consumer activities. Moreover, employees who are not fully back to work may not yet be aware of any cuts to their wages or hours. Still, the data reveal the degree to which citizens feel confident about their economic circumstances and provide an indication of how long it will take for any post-outbreak bounce back. We will continue to monitor this in our daily data to see if there is a sharp deterioration.

Confidence in Hubei has dropped by more than elsewhere, as expected 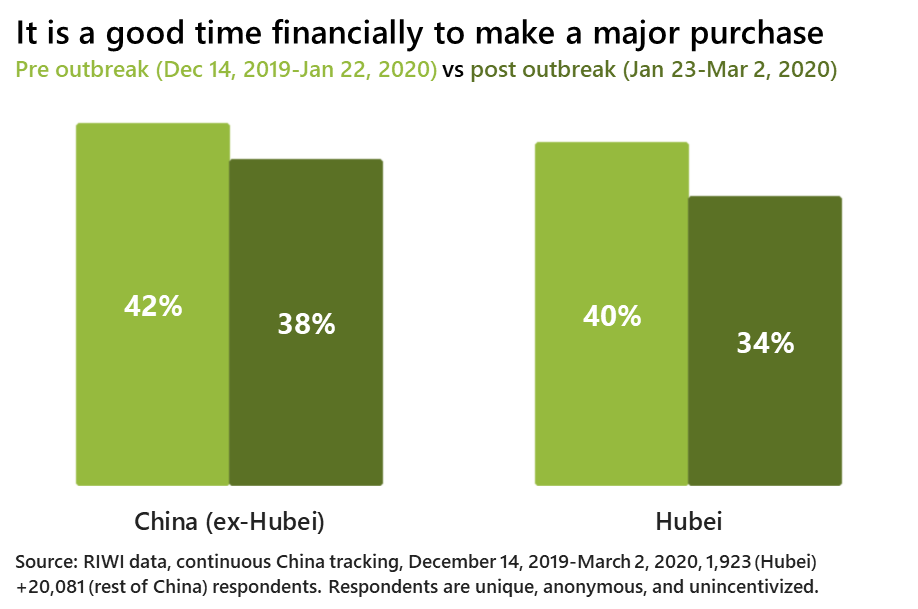 In Hubei province, as we would expect, confidence has dropped relative to the pre-outbreak period and relative to national data. 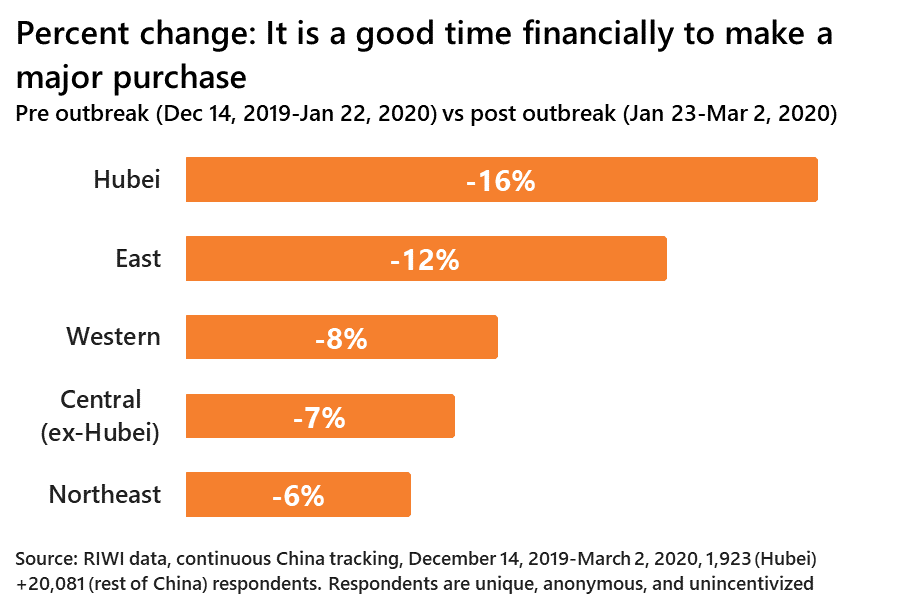 Business sentiment among RIWI’s randomly engaged private company respondents has dropped, but not dramatically relative to pre-outbreak levels. Twelve percent of private businesses expect to shrink their operations compared with 10 percent before the outbreak, but the share that expect to expand remains the same. 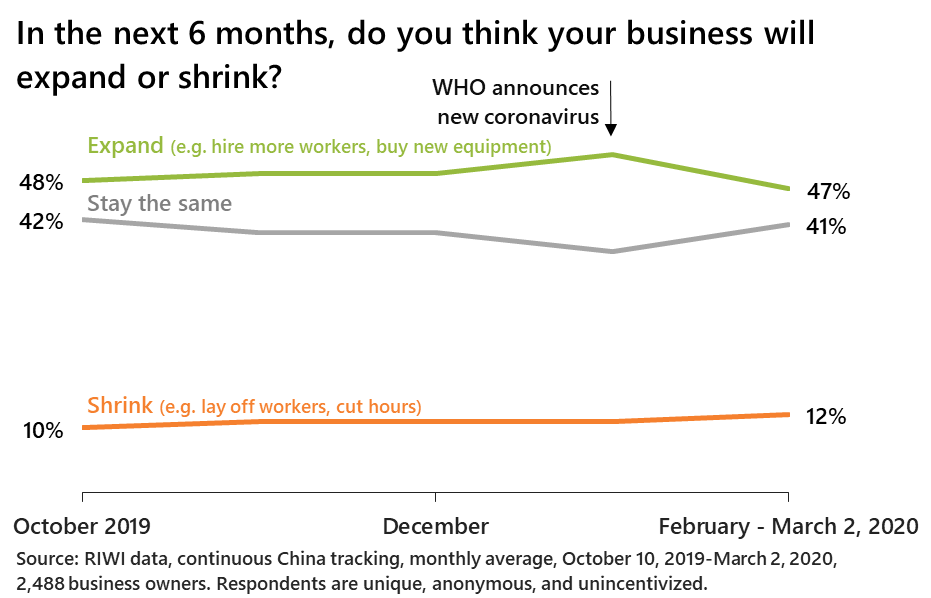 While there is a clear deterioration in both business and consumer sentiment across all regions of China, it is not wildly out of line with levels seen in 2018-19, and the more negative impacts in Hubei are not as deeply felt in the rest of the country at the moment. The Chinese online population across all parts of the country – even in Hubei – is generally optimistic that the outbreak situation is getting better.

RIWI is also monitoring and validating a range of official and other economic indicators across all regions of China using its high-frequency, broad-based sentiment and behavioral data benchmarked against historical RIWI high-frequency data. This includes travel intentions within China and outside, consumer spending trends, sectoral employment changes, smartphone purchase intent, and other customized indicators, at both the national and regional levels. RIWI also collects continuous data on employment and wages, and now that businesses are beginning to reopen, this will allow RIWI and its clients to monitor the size of any deterioration in full-time employment or wages, any rise in involuntary part-time employment, or declines in manufacturing workers relative to other sectors, as well as intentions for businesses to cut hours, workers, or wages, in advance of the release of official economic data.

We will continue to monitor these data to determine the depth, spread, and length of any deterioration and the speed with which currently constrained consumer and business activity changes. As the virus’ global spread continues, we will also be able to assess whether the impact rebounds into China and affects sentiment.

The continuous data collection will also allow RIWI and our clients in the finance sector to determine how much of the deterioration in economic activity is due to the outbreak and how much is due to an underlying weakness or decline that began before the outbreak. These data-enabled insights will thereby tell us the degree to which different aspects of economic malaise or resilience are likely to persist after the outbreak can be effectively contained.

Between June 2018 and March 2020, we have used RIWI technology to randomly engage 165,131 respondents (and counting) from China’s Web-using population to answer questions about their economic behavior and attitudes. The resulting data are high frequency in nature, gathered 24/7 and on a continuous basis, allowing analysts to assess the true impact of the current outbreak. When the world learned about the outbreak in January 2020, we added additional respondents in Hubei to this tracking, as well as a new ongoing survey with a unique set of 26,077 randomly engaged respondents, asking Chinese people about their level of confidence in public health officials and other questions about fear and trust amidst the outbreak5. The RIWI data are broad-based, come from across all regions of China (rural and urban), and draw daily from non-habitual survey respondents. RIWI respondents are un-incentivized, meaning that they answer because the questions seem interesting; they do not benefit in any way by responding.

RIWI collects data using patented, machine-learning technology in order to reach the broadest possible set of potential survey respondents continuously, drawing in populations otherwise not included in data collection, especially in monitored information environments. Anyone using the Web in the country could be randomly exposed to a RIWI survey, resulting in the vast majority of RIWI’s Chinese respondents never or rarely taking prior surveys. This is unlike typical surveys in China that draw only on key urban centres and on habitual, incentivized survey respondents – or on content residing on censored social media. Unlike typical episodic non-random panel-based surveys, RIWI surveys are anonymous, continuous, random and do not collect personally identifiable information. These RIWI measures increase the likelihood that respondents will answer truthfully. 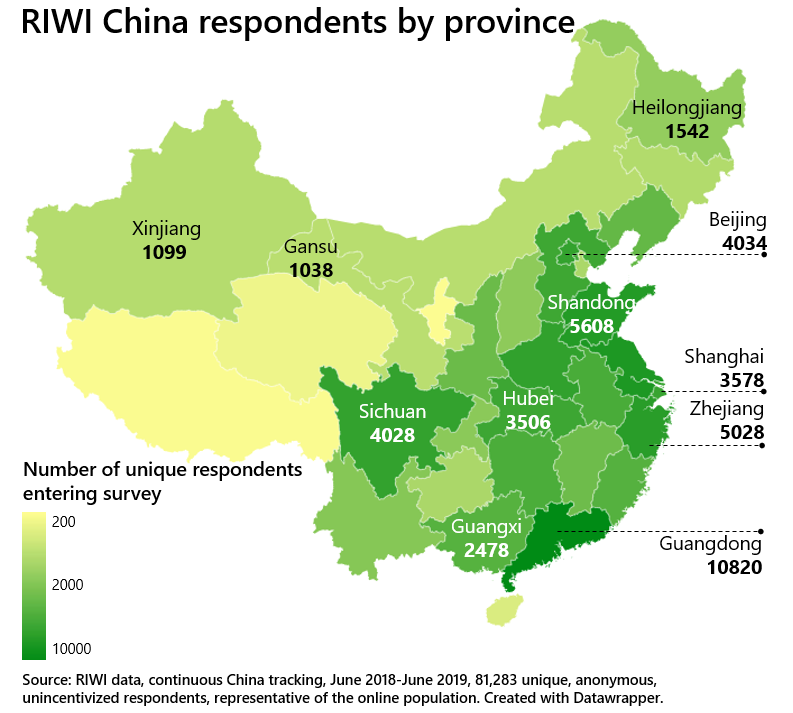 RIWI is a global trend-tracking and prediction company, and a leader in data quality, privacy, and security (see here for more information). RIWI technology is used extensively and under long-term agreements by BofA Securities, the U.S. State Department and by other G7 government agencies, the World Bank, UN agencies, and by academics at top Universities such as Harvard and Oxford. RIWI has won several awards for its global trend-tracking and predictive analytics technology, including the “Rising Star” award for its China data at the 2019 Battle of the Quants in New York City. Independent validation shows that RIWI data are highly predictive of headline US economic indicators such as non-farm payroll surprises.