Nike (NKE), Adidas (ADDYY), H&M (HNNMY), and Burberry (BRBY) are among the global brands caught up in a backlash among consumers in China for raising concerns about forced labor in the cotton industry in China’s Xinjiang region.2 Twenty H&M stores have reportedly been closed, e-commerce platforms pulled H&M products from their platforms and wiped store locations from online maps. Chinese social media users have posted videos of themselves burning Nike shoes and app stores have reportedly pulled Nike and Adidas apps. Celebrities —  including actor Wang Yibo, one of China’s “most marketable celebrities”3 — have announced they have pulled out of sponsorship deals with Nike and Adidas.

Are Chinese citizens actually seeing and responding to these boycott calls? Or are they ignoring attempts to politicize the clothing market? Will Anta, a Chinese sportswear brand often called “the Nike of China,” increase its market share at the expense of Nike? Or is Western media exaggerating the impact of these state and social media campaigns?

There is a lot of speculation but little reliable data on whether Chinese consumers are even aware of these campaigns, much less whether the campaigns will reshape their preferences and behavior.

To get a reliable measure of sentiment on this issue and others, we have been using RIWI technology to hear from random cohorts of the Chinese Web-using population on a continuous basis for almost two years. Since 2019, we have fielded a question about awareness of and participation in US boycotts, and, in early April 2021, we added a question about preferred sportswear brands.

We use a random, anonymous engagement approach in order to ensure broad reach across China’s Web-using population, including amongst those who are not typically included in Web surveys. More than three in five RIWI respondents in China self-report that they have never answered a survey. Also, in collecting data from a unique random cohort every day, we can see if the same results are repeated day after day, and if so, we can invest more confidence in the reliability of these results.

To maximize the chances that people report their preferences honestly, we did not gather any personally identifiable information. Typical surveys in China include information linking the respondent’s personal identifiers to their responses. This could mean that respondents may be less inclined to share their authentic views on boycott participation and on domestic versus foreign brands.4

Every day between March 1, 2019 and May 3, 2021, we asked respondents about their awareness of any recent US boycotts, as well as their participation in the boycotts (Recently, have you seen any calls to not buy American products?: no, I have not seen; yes, but I did not participate; yes, I plan to participate/already participated). Over 50,000 randomly engaged and unique Web respondents answered this question. For those who said they were aware or participated (over 25,000 respondents), we additionally asked, Where did you mainly see calls to not buy these products?: at the store; on social media; news/websites/newspaper; tv/radio; friends/family; can’t remember / other.

Starting on April 8, 2021, we began assessing sportswear brand preference (What is your preferred brand of sportswear/athletic clothing?: Nike; Adidas; Anta; Li Ning; other brand; I don’t buy sportswear). We focused on key global companies listed on stock exchanges outside of China, plus the main Chinese apparel brands. Respondents answered the question on brand preference before the question on boycotts, so as not to bias respondent choice of their favorite brand.5

Are more Chinese citizens being exposed to boycott calls? The RIWI data indeed show a notable increase in Chinese Web users reporting awareness of boycotts of US companies, as well as an increase in participation in these boycotts. The rise in awareness and participation is especially prevalent among 16 to 24 year olds, possibly due to their greater relative exposure to social media and to the role of influencers in these campaigns. 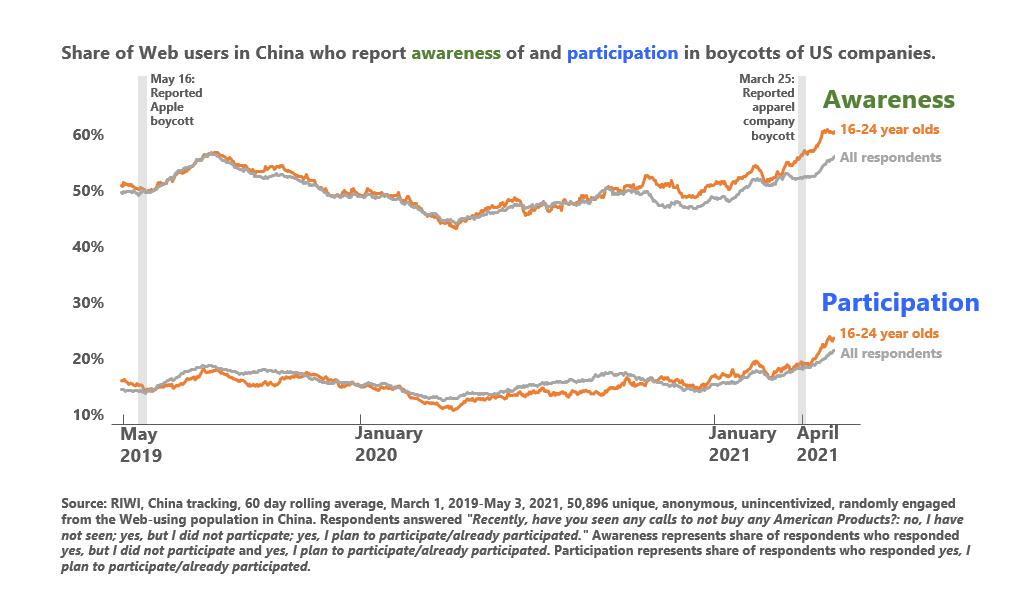 From April 8-May 3, 2021, 60 percent of 16 to 24 year olds reported boycott awareness (compared to 58 percent of all respondents) and 29 percent reported that they actually participated in these boycotts (compared to 23 percent of the overall population). Over a quarter of all respondents (30 percent) identified social media as the primary outlet by which they see calls to not buy US products during this time frame.

In sum, the story that emerges from the data shows that:

RIWI respondents continued to confirm these results with additional daily data from new random cohorts each day in April and early May 2021. For now it seems that brand loyalty trumps boycott intentions. Will this change in the coming weeks and months? As new developments emerge, we will continue to monitor to see if these stated preferences change.

To learn more about these data and the latest daily available data, as well as data on other global brands active in China, please contact Danielle Goldfarb.

1 Thank you to Mary Boyd and Neil Seeman for comments on an earlier version of this piece.
2 For some of the background, see, for example, The biggest sneaker company you’ve never heard of is capitalizing on China’s Nike and Adidas boycotts, Fortune, April 3, 2021.
3 Wang Yibo has a number of sponsorship contracts including Audi, as well as being an ambassador for the 2022 Beijing Winter Olympics. See Wang Yibo: Charting His Rise from Kpop Trainee to China’s Most Marketable Celeb.
4 In an earlier study on smartphone preferences in China, typical survey data that were not gathered anonymously showed a drop in iPhone purchase intentions in 2019 during a tense period in the China-US trade war. This, in fact, turned out to not reflect true purchase sentiment. Contrary to other financial analyst calls, a RIWI study showed a different signal on the true intensity of Chinese demand for iPhones.
5 To ensure our brand preference question design reflected true preferences, we tested three question formulations for brand preference in a separate survey. We assessed each question formulation among a unique randomly engaged cohort of the population. The three formulations were: a) What is your preferred brand of sportswear? b) What brand of sportswear do most of your friends and family like best? c) What brand of sportswear did you last purchase? What brand of sportswear will you buy next? The three question formulations mostly resulted in the same ordinal rankings of the different brands [Li Ning, Nike, Adidas, Anta], except Nike ranked first when asked about what family and friends prefer. We ran the first question in both the test and the current study simultaneously, and on both occasions Nike ranked just behind Li Ning for all age groups combined. 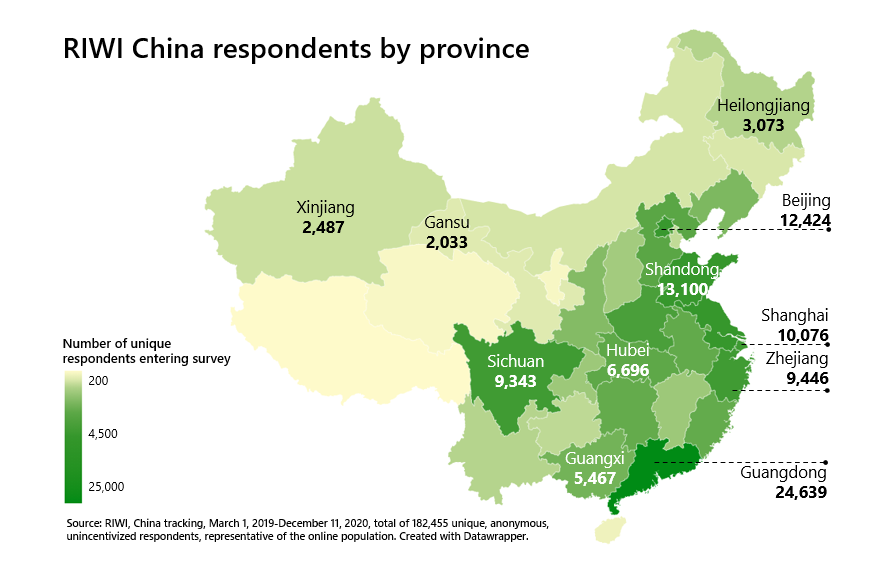 Between June 2018 and April 2021, we used RIWI technology to randomly engage respondents from China’s Web-using population to answer questions about their economic and consumer behaviors and attitudes. The resulting data are high-frequency in nature, gathered 24/7 and on a continuous basis. The RIWI data come from across all regions of China. The RIWI data includes cities from across all four tiers. (China has 613 cities, with the wealthiest and most populous in Tier 1. There are 5 Tier 1 cities, 30 Tier 2 cities, 138 Tier 3 cities, and 480 Tier 4 cities. Most typical survey data in China does not cover Tier 3 and 4 cities.) RIWI respondents are un-incentivized, meaning that they answer because the questions seem interesting; they do not benefit in any way by responding.