Many undecided in advance of UK election 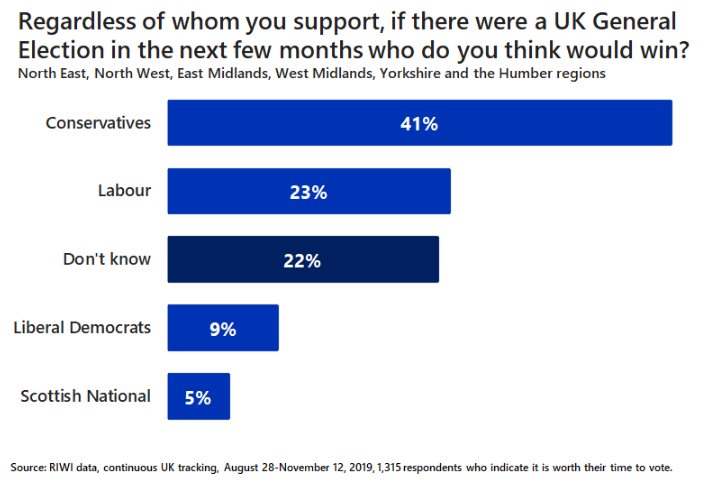 In the past, pollsters could assume that an X% increase in a party’s overall vote share implies an X% increase in each constituency but this did not apply in the 2017 UK general election, nor is it likely to apply in the upcoming election. To accurately predict the result of the upcoming election, it will be crucial to look deeply at regional differences. Moreover, now party support is strongly influenced by individuals’ stance on Brexit.

RIWI has been continuously tracking Brits’ opinions on Brexit since March 2019, adding questions about a potential general election in August. Unlike traditional polls which sample from a narrow, self-selected, highly engaged group of (mostly paid) respondents, RIWI respondents come from a broad and truly random set of the population, and go far beyond those who typically answer surveys of any kind. Over sixty percent of RIWI daily British respondents report to us that they have not answered a survey in the past month. RIWI does not collect any personally identifiable data and respondents are not incentivized in any way (e.g. with money or rewards), allowing respondents to provide their views freely and securely, reducing social desirability bias. RIWI accurately predicted the lack of youth turnout that proved critical in the 2016 Brexit referendum, President Trump’s 2016 election win and many other recent elections and referenda. 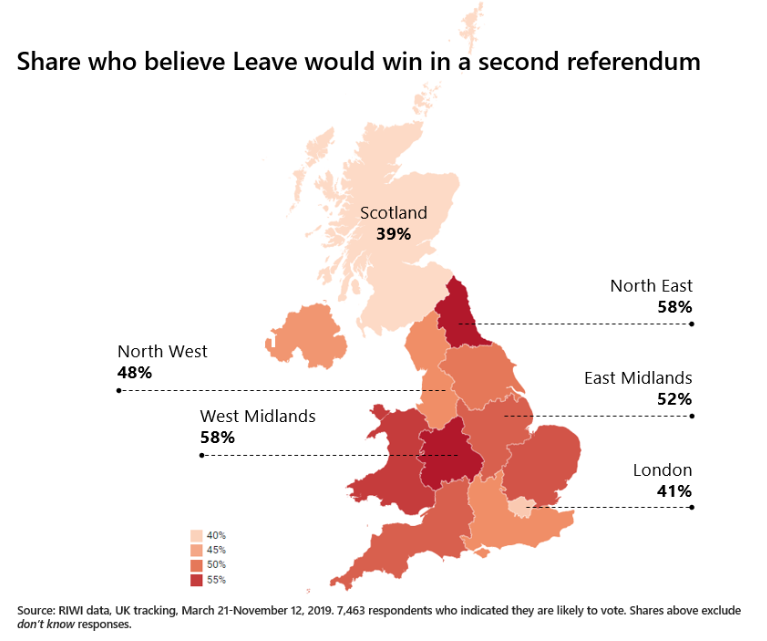 Our map highlights opinions of likely voters across the crucial swing regions (North England, the Midlands, and Yorkshire and the Humber). West Midlands and North East have the highest support for leaving the EU, which could prefigure support for the Tories in the upcoming election.

The result of the general election will come down to a handful of contentious constituencies. To predict whether the Conservatives win a majority this December, RIWI is tracking party preference, likelihood to vote, opinion on Brexit, among other indicators in all counties/districts in the UK.